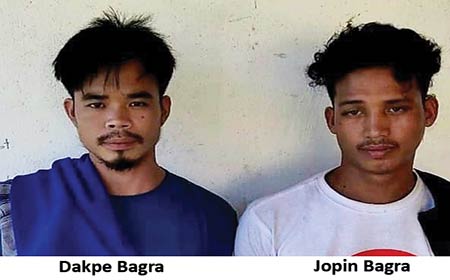 AALO, Oct 15: After a month of hide and seek, the police here in West Siang district finally arrested two people in a hit-and-run case.
The arrested are Jopin Bagra (27) and Dakpe Bagra (24) from Bagra village in West Siang, who are currently in judicial custody.
The two had knocked down Poi Doji Lollen, an employee of the DC’s office, who later succumbed to her injuries.
An R15 motorcycle bearing registration no AR-01H-2569 has been seized by the police.
The case was registered on 12th September and after four days of registration of the case, the victim died while being treated at a hospital in Dibrugarh, the police informed.
Following a tip-off, a team consisting of Inspector Yomken Riram (OC PS Aalo), SI S Basar, ASI T Nomuk and others conducted raids in Bagra village on 12th Oct and arrested the culprits.
The IO of the case, ASI T Nomuk faced difficulties during the investigation due to unavailability of witnesses and also due to the darkness, which had rendered all the CCTV footages collected useless, said police.
The case was initially registered under section 279/338, but during the investigation period, the victim succumbed to the injuries, sustained during the mishap and died and hence, section 304-A and other sections as found relevant during the investigation are being added in the case, the police added.
Meanwhile, West Siang Superintendent of Police Jummar Basar has appealed all to ride safely and ensure safety of self and others.