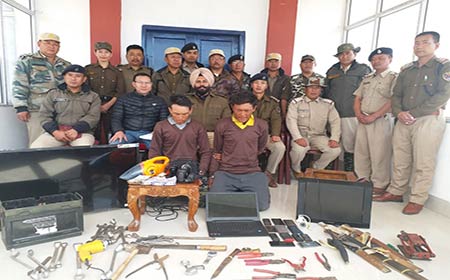 TAWANG, Oct 17: The police here nabbed three burglars on 16 October in connection with a series of robberies that took place in the district during the month of September.
The accused have been identified as Passang Rai, Dawa Rai (23), and Nima Rai (22).
Numerous stolen goods, including a laptop, an LCD TV, LPG cylinders, mobile phones, cash, and even CCTV cameras were recovered from their possession. House-breaking tools, such as electric cutters and an electric drilling machine, were also seized from the trio, besides knives, daos (machete), and a hammer.
The Tawang police informed in a press release that they had received complaints from the residents of Buddung Teng (Kargil Colony) regarding repeated incidences of burglary and attempts at burglary in the colony throughout September.
The police then formed a team, led by DSP Thupten Jambey, under the supervision of SP Sagar Singh Kalsi, to apprehend the culprits.
On 26 September, the team raided a house in Lechheme Rong, and Passang Rai was apprehended with numerous stolen goods and house-breaking tools in his possession. However, his accomplices, Dawa and Nima, slipped away.
Twenty days later, on receiving intelligence input from the Tawang SB unit, another raid was conducted in Nagula area on 16 September, and the accomplices, Dawa Rai and Nima Rai, were nabbed.
During interrogation, the trio revealed that they are brothers.
“They have not studied past primary and were working as labourers. In the lure of easy money, they planned and started house-breaking at night in nearby villages. When successful, they started committing burglaries across the district,” the police informed.
“Many more FIRs against them are being received. More than 10 cases of unreported burglary and theft have been committed by them,” the police added. (DIPRO)