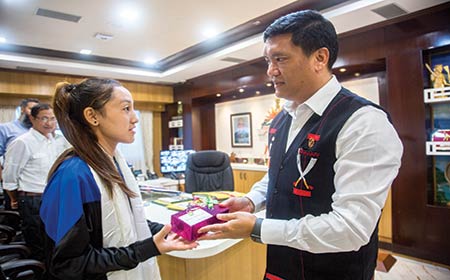 ITANAGAR, Oct 17: Chief Minister Pema Khandu on Thursday felicitated young athlete Joti Mane, who recently became the first sportsperson from Arunachal to win a gold medal in any national athletics championship.
Khandu congratulated Mane on her stupendous feat, and encouraged her to “keep practicing and bring more laurels for herself and the state.”
The athlete won the 5000-mtr race in the girls’ U-20 category in the 31st East Zone Junior Athletics Championship, which was held in Jharkhand capital Ranchi on 14 and 15 September.
Mane clocked 19.45 minutes to win the gold.
Mane, who hails from remote Monigong village in Shi-Yomi district, said there are many talented athletes in her village, who, after witnessing her success, “are eager to take to track, provided basic facilities are made available.”
Mane attributed her success to her coach, MK Pegu, because of whom, she said, she is availing the training facilities at the Sangey Lhaden Sports Academy here while also pursuing her BA degree at Dera Natung Government College (DNGC).
Pegu informed that Mane was spotted by a talent-hunt organization when she was studying in West Siang HQ Aalo but could not attend the final selection camp in Guwahati (Assam) due to her Class 12 examination.
“After her exams, I pursued the DNGC authorities and got her admitted under the sports quota, so that she could train at the sports academy,” Pegu, who is retiring next year, said.
When asked about the training facilities at the academy, Mane said that “the facilities are in place but not upto level.”
“Here we train on a different ground but have to run on a different surface in competitions. It would be helpful for our athletes if similar tracks are prepared here,” she said.
Mane gave assurance that she would give her best in the forthcoming 35th National Junior Athletics Championship, scheduled to be held on 1 and 2 November in Andhra Pradesh.
Sports & Youth Affairs Secretary, Ameya Abhayankar, who visited the sports academy on Thursday morning, gave details of the facilities and the infrastructure coming up there to the CM.
He said the department would “prepare a roadmap for the academy while putting in place a mechanism to track the development and training of sportspersons in the academy.”
Shi-Yomi District Olympic Association president Aling Pingam also accompanied Mane. (CMO)