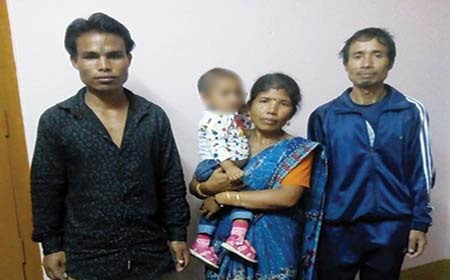 ITANAGAR, Oct 17: The four-year-old abandoned child who had been left with two women of Division IV here on 2 October by her mother, was reunited with her father on the evening of 16 October.
The Child Welfare Committee (CWC) here had taken custody of the child after the matter had been reported by the women’s police station. After verification, the child was handed over to her father, Kaliyama Taid, of Bhurbanda village in Lakhimpur district of Assam.
Taid said he is a daily wage labourer in Ziro (Lower Subansiri) and had sent his wife with their daughter to Itanagar for the child to undergo a cleft-plate surgery.
According to the father’s statement, he learned about the incident through social media and newspaper reports.
Meanwhile, CWC chairperson Kani Nada Maling thanked the media for their proactive role in making the reunion possible.