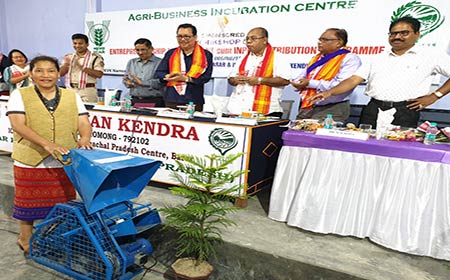 NAMSAI, Oct 18: As many as 190 participants, including HoDs, members of the Agri-Business Incubators (ABI) and the Spices Board, GBs, village heads, and farmers from Namsai, Lower Subansiri and Anjaw districts attended a workshop on entrepreneurship development, jointly organised by the ICAR’s Basar centre and the Namsai KVK here on 18 October.
Deputy CM Chowna Mein, who attended the workshop’s inaugural function, said “the ABI will play an important role in developing the agriculture and allied sectors, and give opportunities to the unemployed youths of the district as well as the state.”
He spoke about infrastructure development in agriculture and allied sectors, and called for forming “a complete package of practice, from production to marketing, to create self-employment in the district.”
The DCM also urged the ICAR’s scientists to give more emphasis on “location-specific research in the district.”
Citing the decline of Mandarin orange in Wakro (which was once known as the Orange Bowl of Arunachal) as “a setback to the farmers which could not be contained by the agriculture and horticulture departments till date,” he said not enough research has been done to control the orange decline.
Mein also called for strengthening the district’s farmers-producers company “to make the farmers self-sustainable and become employers.”
He suggested developing a demonstration plot for tropical fruits in the KVK complex, and popularizing large-scale cultivation of Khamti rice and king chillies.
Mein further informed that an auction centre and a wholesale market would be established “in the vicinity, so that the whole area becomes a hub for promotion and augmentation of agricultural activities and marketing of agricultural produces.”
Informing that the recommendations made during workshops and conclaves on the agriculture and allied sectors have been incorporated in the budget, he said the works are in the pipeline.
Earlier, the DCM inaugurated an exhibition stall put up by the Namsai Organic Spices & Agriculture Product Producer Company Limited, which is promoted by the Spices Board. He also released technical bulletins and the KVK’s newsletter.
Members of the Namsai farmers-producers company, along with large cardamom growers from Anjaw district highlighted their grievances before the DCM. He assured to look into the issues.
Guwahati (Assam)-based ATARI Zone VI Director, Dr AK Tripathi, highlighted the different schemes for doubling the farmers’ income and promoting organic farming in the district, while the ICAR’s Manipur Centre Joint Director, Dr N Prakash, spoke about “promoting unemployed youths through the ABI in the district.”
The programme also included distribution of millet threshers, poultry chicks, feeders, etc, among ABI members, grafted Khasi mandarin seedlings to SC project beneficiaries, toria seeds and vermicompost to seed village project beneficiaries, field peas to CFLD farmers, and weeders, sprayers and hand hoes to TSP farmers from different villages of the district.
Among others, the programme was attended by Namsai DC B Talukdar, the ICAR’s Basar Centre Joint Director Dr H Kalita, Namsai KVK Head Dr Manish Kanwat, and the HoDs of agriculture and allied sectors of the district. (With DCMO input)