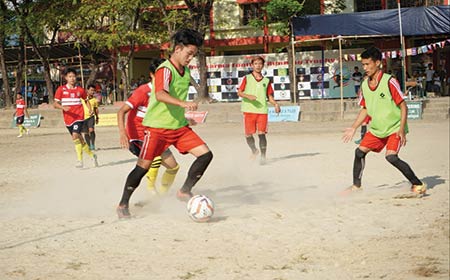 CHIMPU, Oct 19: 5/1 United FC and defending champion, Champion FC, entered the quarterfinals of the 25th Vishwakarma Running Trophy Football Tournament here on Saturday.
In the first match of the day, 5/1 United FC thrashed Chimpu United by 10-1.
5/1 United FC’s Tagru James scored a hat-trick, in the 7th, the 41st, and the 42nd minute, while Tapan Borah scored in the 17th and the 23rd minute, followed by Byabang Dolley in the 26th and the 28th minute. Tame Loram and Gyamar Tatin scored a goal each in the 48th and the 49th minute, respectively.
The lone goal for Chimpu United was scored by Biri Chatey in the 37th minute.
In the next match, Champion FC defeated Aniya Rayo FC 2-1.
Champion FC’s Gangte Ajay scored the first goal for the team in the 12th minute. The score was later equalized by Aniya Rayo FC’s Taba Heli in the 26th minute through a penalty.
Later, Dare Lugu of Champion FC secured his team’s victory by scoring a vital goal in the 49th minute through a free kick. He was also adjudged man of the match.
In the quarterfinal matches on 20 October, Gohpur SC will take on Panthers SC, while Chimpu FC will play YG FC Papunallah.