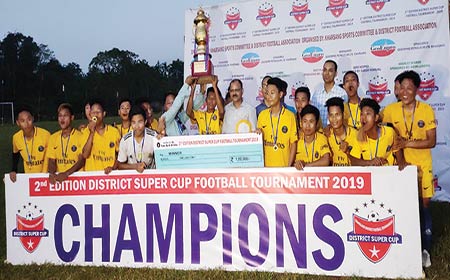 Correspondent
KHARSANG, Oct 19: Bordumsa FC defeated Namphai-II United FC with three goals to nil in the final match of the second edition of the District Super Cup Football Tournament which concluded here in Changlang district on Saturday.
The final match witnessed both the teams making rapid attacks and counter-attacks, with many near misses. However, Bordumsa FC scored their first goal towards the end of the first half, and added two more in quick succession in the second half.
The weak defence of Namphai-II United FC proved disastrous for the team.
Among others, DC RK Sharma and Miao ADC Tage Rumi witnessed the match.
The tournament was organized by the Kharsang Sports Committee (KSC), in collaboration with the District Football Association (DFA) and the sports department.
GeoEnpro Petroleum Limited was the title sponsor, while the individual prizes were sponsored by youth leaders of Kharsang. The winners took home a cash prize of Rs 1 lakh and the trophy, while the runner-up team got Rs 50,000, along with a trophy.
The awards for the best player of the tournament, the best goalkeeper and the highest scorer all went to the champion team. Nampong Bazaar FC was adjudged the ‘discipline team’.
Sharma, Rumi, DFA president Sambo Changmi, and KSC president T Latam addressed the concluding function.