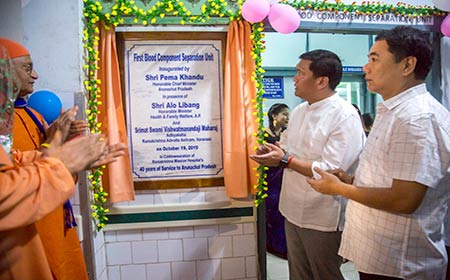 Pasighat to get med college

ITANAGAR, Oct 19: Chief Minister Pema Khandu said the state government is willing to work with the Ramakrishna Mission Hospital (RKMH) here on the public-private partnership (PPP) mode, in order to expand the hospital’s bed capacity to 300.
The chief minister, who attended the foundation day celebration of the RKMH on Saturday, said his government is also ready to assist the hospital “in terms of infrastructure and funds for manpower.”
As part of commemorating the hospital’s 40 years of service to the state, Khandu, who was accompanied by Health Minister Alo Libang, PHE Minister Wangki Lowang and Daporijo MLA Tanya Soki, inaugurated the obstetrics ward and the blood component separation unit (the first in the state) in the hospital.
He said the state government also wishes to connect the RKMH with the Pradhan Mantri Jan Arogya Yojana and the Chief Minister’s Arogya Arunachal Yojana.
“The coverage under both the schemes has reached around 1 lakh households in the state, and the RKMH being covered under the scheme would immensely benefit the people,” he said.
Khandu said the state government seeks to strengthen the healthcare services by providing grants-in-aid under the Mukhya Mantri Rogi Kalyan Kosh for procuring medicines and improving infrastructure.
He also informed that “the health department has banned all central procurement of medicines, and now (medicines) will be procured from the district level.”
“This will enable the districts to place their procurement as per their needs, and enable people to have free medicines,” the CM said.
He also announced that the state government will soon establish another medical college, in East Siang HQ Pasighat, and that the bed capacity of the TRIHMS would be increased from 50 to 100.
“Besides expanding health services, it will increase the intake of medical students in the institute,” he said.
The health minister also spoke. (CMO)