Penru (literally, bat cave) is an ancient cave located near Larmuk Potom village in Darak circle of West Siang district. It is located at latitude 28º11’38” N and longitude 94°33’55.73″ E.
It’s about 10 kms from Darak circle headquarters. It is one of the largest and deepest homes of the black species of flying mammals. Though such roosts are located in many places in the circle, the roost caved deep in the rocky hillock near Larmuk Potom has been famous through the ages in terms of witnessing the fluttering of bats under the evening sky in such large numbers that they even obstructed passersby and dropped into houses in the olden days. 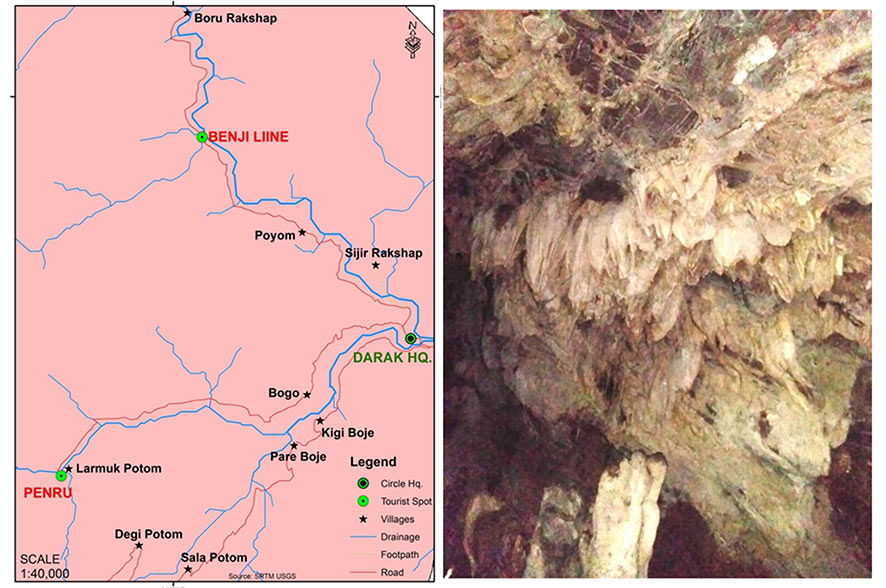 These bats used to be seen at their playful best in large numbers just after sunset from the month of March to October. They would hibernate in winter as few bats would be seen flying around, perhaps for food, drink and rehydration, using a combination of echolocation and receptors to navigate the winter nights and the spine-chilling cold wave that used to sweep that particular location.
The population of the bats has dwindled drastically over the years due to disturbances caused by human activities. It is said that the cave used to be very deep and long but is not so deep now. There is one narrow hole at the centre through which bats used to fly in and out. Maybe that was the passage to the cave inside. It is believed that the passage to the cave was blocked when the Assam-Arunachal earthquake occurred in 1950.
It is said that Penru was discovered by the villagers some seven-eight generations back, when they were wandering in the jungle in search of preys to hunt. At first the villagers were very scared of entering the cave. They saw that large numbers of bats used to fly in and out of the cave. Thus, it got the name Penru. They believe it to be the home of the spirit (Uyu). Thus, none had the courage to go inside the cave and explore.
According to late Likar Potom (ex-head gaon burah), a group of villagers once decided to explore the cave out of curiosity. Thus, with full preparation, carrying Meru/Mvru (bundle of bamboo sticks with fire) they went inside the cave. They were very astonished at the natural beauty of the cave. They saw that the cave was naturally decorated with horn-like structures, idols like figurines, elephant tusks-like structures, and many other structures of unique shapes and sizes. It is also said that there were streams inside the path of the cave. During those days, the cave was very deep and long. The said group used to carry 3-4 merus (bamboo stick fire lighter) but could not reach the end of the cave.

Old incident: The incident happened during the visit. One of the members of the group mistakenly broke a horn-like structure inside the cave. Later, he fell mysteriously ill. While he was ill, he dreamed that a group of people visited him and demanded a fine for his mistake. They warned that if he wouldn’t pay the fine on time, they would take revenge for his mistake, and that he would have to face dire consequences later on.
He narrated his dream to a Nyibu (shaman). The nyibu understood the meaning of the dream and did the needful rituals, ie, Roksin Kognam (divination of chicken liver). Then the nyibu asked that person to do rituals and sacrifice (Uyu-monam) to appease the spirits of the cave and pray to them for forgiveness. He did everything as directed by the nyibu. Thereafter, he got well from his illness. After this incident, the people stopped going inside the cave. They feared that the spirit might attack them also.
But it was during 2002-03 that a group of village youths boldly went inside the cave, again out of curiosity. They found that no misfortune happened to anyone. Thus, people frequently visit the cave now.

Recent incident: Another incident happened in 2004-05, in which one village girl child (Kiryir Potom) was said to have been possessed by the spirits of Penru. It was because her father (Pokir Potom), while clearing the field (jhum cultivation) near the cave, felled a big tree and the tree accidentally fell upon the cave and one unique figurine of the cave was broken. After this incident, the child suffered from unknown smallpox-like disease. Medical help was sought to cure the disease, but no improvement could be seen. Meanwhile, the child’s father told the villagers about the felling of the tree and the breaking of the cave figure.
With no option left, the villagers went inside the cave, performed some rituals, and prayed for forgiveness to the cave. Miraculously, the child’s disease faded away by itself after some days.
Thus, it is believed that spirits dwell inside the cave and look after it. Any visitor can visit and explore the cave, but one should keep in the mind that he or she should not try to damage any part or structure of the cave. If anyone does so, it is believed that the spirit or god of the cave would be annoyed, and the result is best known to all. (The contributors are both assistant professors and PhD scholars)