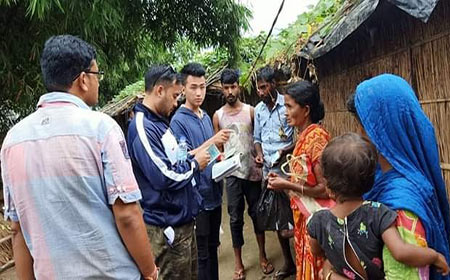 ITANAGAR, Oct 21: Over 400 people in the twin capital towns were found without inner line permits (ILP) during the ILP checking drive organized by the All Nyishi Students’ Union (ANSU), along with the district administration and the police department, on Monday.
Those not possession ILPs were detained, and later dropped off at the Banderdewa check gate.
Speaking to reporters, ANSU president Toko Takam informed that the union carried out ILP checks at 13 locations in Itanagar and Naharlagun, with the help of the administration and the police.
He said the defaulters were first taken to the police station, and sent back after thorough verification.
“We made sure that the defaulters were sent back to their respective places,” Takam said.
“This drive is not for individual benefit but for the greater interest of the state,” he said, adding that, due to
the NRC exercise in the neighbouring state of Assam, many people have entered Arunachal without proper ILPs. Takam also requested the people of the state to bring in labourers only through proper channels, and minimize future tribulations in the state or on individuals.
ANSU general secretary Tukbom Ligu said the union will soon submit a representation to the state government to ensure thorough checking of ILPs at various check points of the state, especially in the Assam-Arunachal boundary areas.
“In many cases, people are allowed to enter the state merely on paying some cash, without obtaining ILP, at the check gates. This attitude of a few police personnel is very careless,” Ligu said, adding: “We will also initiate talks with the district administration and the police department in the matter.”
He said anyone from outside the state should obtain an ILP, whether the person is a government employee, a student or an officer, to enter the state. “This is the framed rule in the Bengal Eastern Frontier Regulation, 1873,” he said.
Ligu also informed that many government employees were excused during the drive, but requested them to obtain ILPs if they are serving in the state for long terms.