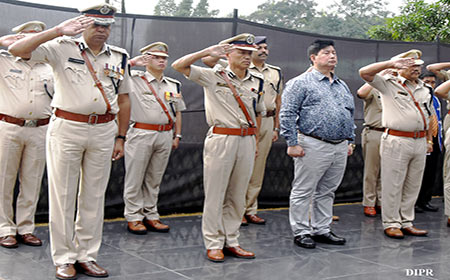 BANDERDEWA, Oct 21: Police Commemoration Day was observed in a befitting manner by the department at the Police Training Centre here in Papum Pare district on Monday.
Among others, Director General of Police RP Upadhyaya, senior police officers, and officials of the ITBP and the CRPF were present on the occasion.
Parents and families of martyred policemen were special invitees at the function.
The event included presentation of a guard of honour, slow march-past by police personnel, and laying of wreaths and paying of floral tributes at the police memorial, in honour of the police officers and personnel who laid down their lives in the line of duty.
The flag was hoisted at half-mast for a few minutes, in honour of the martyred policemen. (DIPR)