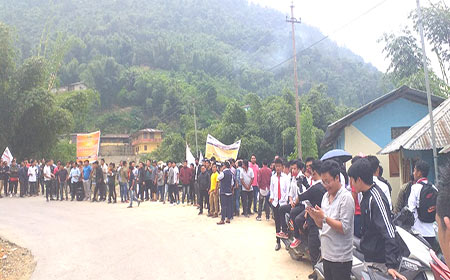 Staff Reporter
ITANAGAR, Oct 21: The All East Kameng District Students’ Union (AEKDSU) staged a protest rally in Seppa on Monday over various issues, including land encroachment and selective issuance of land allotment licences to various individuals in Yallopu area there.
The rally, which started from Meena Pahar and culminated at the deputy commissioner’s office, also saw the participation of representatives of the All Arunachal Pradesh Students’ Union, the North East Students’ Organisation, and the Rajiv Gandhi University Research Scholars’ Forum.
In a representation it submitted to the DC, the AEKDSU demanded immediate arrest of the Seppa UD & housing division’s executive engineer and all the engineers involved in the construction of the new government higher secondary school (GHSS) building in Bebo Colony. It claimed that several irregularities and anomalies occurred during the construction and handing over of the school building.
“Cracks have developed, the roofs are leaking, and basic facilities have not been installed in the newly inaugurated building, and the whole building is in a dilapidated condition” the union stated in the representation.
It also demanded “eviction and demolition” of structures that have been built unlawfully in the school’s premises by some individuals.
In its representation, the AEKDSU also urged the administration to demolish the boundary wall erected in the premises of the mini-secretariat in Seppa, claiming that some private parties have encroached on the land demarcated for establishing the mini-secretariat.
The union further urged the authority to cancel the land allotment licences issued to various individuals in Yallopu.
“Public utility places as such should be maintained and stored for future uses of the district,” it said.
The AEKDSU also demanded that the structures constructed in the Seppa Cooperative LAMP’s premises be demolished, and sought a clarification from the DC in the matter of the inauguration of the defective GHSS building.
Responding to the representation, Deputy Commissioner Gaurav Singh Rajawat has said the administration will initiate action with regard to the AEKDSU’s demands within a week.