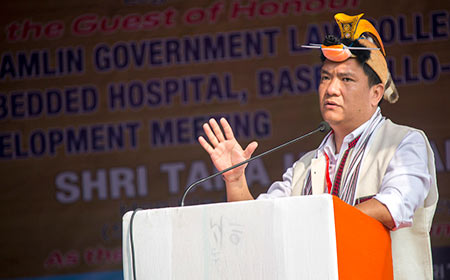 BASAR-NELLO, Oct 22: Chief Minister Pema Khandu on Tuesday assured the people of Sangdupota circle in Papum Pare district that the state government would upgrade the road connecting the circle with the state capital, after the locals said they would forgo seeking land compensation.
Addressing a large gathering of government employees, students, gaon burahs, gaon buris, and others here, the CM commended their decision, and gave assurance that he would “not waste time to upgrade the existing road to a double-lane state highway and start its construction.”
With vast stretches of land yet to be optimally utilized, and because of its proximity to Itanagar, the area boasts of several important institutions, such as the National Institute of Technology (NIT), Jarbom Gamlin Government Law College (JGGLC), Bini Yanga Government Women’s College, the Film & Television Institute of India, and the Cane & Bamboo Processing Unit. Many other projects are still in the pipeline.
Advising the people to learn from the people of eastern Arunachal, Khandu said, “See the beautiful roads they have. Think of the pace of development they are witnessing. Can’t we in the western districts do what they can? Like them, can’t we forsake the land compensation demand we make every time a developmental project comes around?”
He spoke about the people of 10 villages in Upper Siang district, who, during his recent visit to Yingkiong, assured him in writing that they would not seek compensation if a road is built their area.
“They just want the road, nothing else, because they know that once the road comes, everything else will follow,” the chief minister said.
“As you have all agreed not to demand compensation, I assure that the road will be sanctioned by November, and the tender process completed by December,” he announced.
He suggested that a local monitoring committee be formed under the local legislator and the deputy commissioner to oversee the construction of the road, once it starts. Khandu, however, wondered aloud how the fund of about Rs 12 crore, which had been sanctioned for the road’s maintenance only a year ago, had been utilized.
On the positive side, the villagers of the area not only promised not to seek compensation for the double-lane road but also offered land for future extension of the state capital.
Expressing appreciation for the gesture, Khandu said “good sense has prevailed,” and that it was about time that “the mindset of the people changed from short-term to long-term benefits.”
“With such vast stretches of land available in a serene and pristine environment, plus its proximity to the state capital, Sangdupota circle has the potential to become the educational and tourism hub of the state,” he said.
He, however, reminded the people that although creating assets is the government’s responsibility, “preserving these and reaping benefits from them is the responsibility of the people.”
Citing the example of JGGLC, which he had earlier in the day inaugurated in Jote, on his way to Basar-Nello, Khandu expressed concern over on its condition. Taking cognizance of several shortfalls in basic facilities, as well as “infrastructural shortfalls of the college building,” he urged the locals to treat such assets as their own.
He added, however, that “all shortcomings and shortfalls will be immediately met up.”
The chief minister also expressed concern over the delay in completing the NIT in Jote. He said it was tragic to see the half-completed buildings just the way they were when he had visited the site two years ago.
As the NIT comes under the purview of the union HRD ministry, he assured to personally pursue the ministry for its early completion. He advised the NIT authorities to “take up one infrastructure at a time, according to priority, and complete it hundred percent before going for the next.”
“Once institutes like the NIT, the FTII, etc, become fully functional, it will benefit the entire state, with Sangupota being on the top of the list. So please be responsible local guardians.
“If the locals guard, cooperate and become responsible towards public assets, no one can stop economic development from coming to the area. Let’s work today for the tomorrow of our children,” he said.
Earlier, Khandu laid the foundation for a 30-bedded hospital here, to replace the existing primary health centre.
Legislative Assembly Speaker PD Sona, who was also present, urged the people of the area to create an atmosphere conducive to developmental activities.
“The onus is on the public of the area to create an atmosphere conducive to development,” he said.
Stating that the state government under Khandu’s leadership is committed to facilitate development on all fronts, the speaker urged the public of Sangdupota to make good use of all the facilities being provided in their area.
Exuding hope that the upcoming 30-bedded hospital would cater to the healthcare needs of the area, Sona emphasized on ensuring quality of work.
He also urged the senior members of the society to guide their children not to indulge in “abusive substances.”
“Drug addiction is a social menace, and it is the responsibility of each member of society to work to contain it,” Sona said.
The CM and the speaker were accompanied by, among others, Education Minister Taba Tedir, local legislator Tana Hali, former minister and local leader Nabam Rebia, HoDs, and officials of the district administration.
During the inauguration of the JGGLC, siblings of late chief minister Jarbom Gamlin, Jarkar Gamlin and Jarjum Ete Gamlin, were also present. (CMO & Speaker’s PRO)