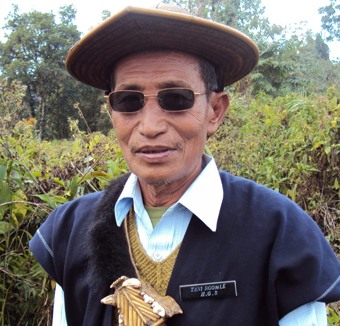 Staff Reporter
KANGKU, Oct 24: A founder-member of the peace committee of Assam- Arunachal boundary in Kangku circle of Lower Siang district, head goan burah Tani Ngomle of Hime Village passed away on Thursday morning after prolong illness at his native village.
Late Tani Ngomle was 72.
Born on 27 September, 1947 at Renyigii village under Gensi circle of then West Siang district, late Ngomle was elected elected as the Zilla Parishad Member of undivided Gensi-Likabali in the year 1980.
He played a significant role to de-escalate and mediate between Assam and Arunachal Pradesh border tension in 1987, especially in Likabali area.
Late Ngomle was instrumental in forming the first peace committee amongst people of boundary areas of Assam and Arunachal in 1988 during skirmishes and had been promoting peace and communal harmony among boundary area residents. He later became the secretary general of the said committee.
Late Ngomle was also the president of the gaon burah association of Kangku circle till his passing.
Besides a champion social worker, Ngomle was also a very good orator of Likabali sub division.
Late Ngomle is survived by two fives, four sons and two daughters.
On the news of his demise, Likabali MLA Kardo Nyikyor extended his deep condolences.
In a condolence message, the MLA said, “I am deeply shocked and saddened to hear that late Tani Ngomle passed away. Under his leadership, many complicated boundary and local issues were settled. His contribution to the society is uncountable.”