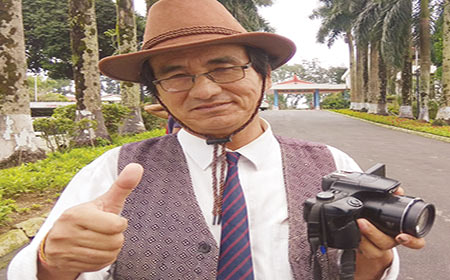 Staff Reporter
ITANAGAR, Oct 26: The first journalist of Arunachal, Taro Chatung, breathed his last on Saturday. He had been diagnosed with cancer, and lost the battle at around 10.30 o’clock on Saturday morning at the TRIHMS in Naharlagun.
He was 56, and is survived by his wife, three sons, and a daughter.
Chatung’s body was taken to his rented house in Mowb-II here for public viewing, and later brought to the Arunachal Press Club to enable the press community to pay their last respects, before being taken to his native village, Hija, in Lower Subansiri district, where his mortal remains will be laid down.
Chatung was the first journalist of the state. He started on his journalism and filmmaking career after leaving his state civil service job in 1988. He was also a state gold medal awardee.
Chatung, who was known for his straight questions in Doordarshan’s News & Views programme, was a founding member the Arunachal Press Club (APC) and the Arunachal Pradesh Union of Working Journalists (APUWJ). He served as the president of both the union and the club for a very long time.
The demise of the trailblazing journalist came as a shock to the media community of the state. The APC, the APUWJ, and the Arunachal Electronic and Digital Media Association have termed his demise the saddest day in the history of the state’s media.
In their condolence message to the bereaved family, the media bodies said, “An inspirational figure of the state media has gone and left a vacuum that young journalists will find hard to fill.”
Describing Chatung as the father of the state’s media, the message stated that his contributions in the field of journalism are unsurpassable. The media bodies have deeply mourned Chatung’s demise, and prayed for eternal peace of his departed soul.