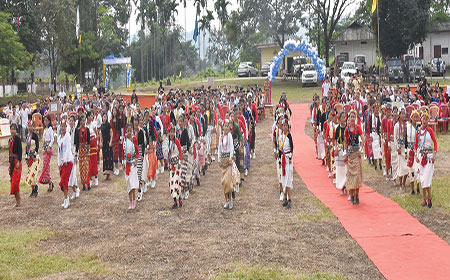 DOIMUKH, Oct 31: Deputy Chief Minister Chowna Mein advised students to develop “a sense of competitiveness and make themselves competent enough to compete in any part of the world.”
Addressing an event at the government college here in Papum Pare district on Thursday, the DCM said “there is limited scope for everyone to be accommodated in white-collar government jobs; it is high time that the students skilled themselves to compete and work in any part of the world.”
Stating that the Pema-Khandu led government has made the recruitment system “fully transparent by creating the Staff Selection Board,” the DCM said, “Now the candidates will be selected purely on merit basis for Group C vacancies too, thereby giving no scope for backdoor entry.”
He also urged the student community to preserve and promote the socio-cultural fabric of the state, and described drug addiction as “the biggest challenge facing the young generation.”
He urged the students to keep away from addictive substances, and urged every responsible person to ponder the challenge of drug addiction and find a solution to it.
Addressing the college’s faculty members, Mein said that “with the privilege of getting government job by the indigenous tribal people as per the 80:20 reservation ratio, our responsibilities have also increased. We must shoulder this responsibility with sincerity and dedication, and mould the future generations in the right direction.”
The DCM also urged everyone to be a part of the Hamara Arunachal Abhiyan launched by Home Minister Bamang Felix “to make our state a better and safer place to live.”
Mein further assured to look into the three-point memorandum submitted to him by the students of the college.
State BJP vice-president, Dominic Tadar, appealed to the students to maintain good atmosphere in the college campus. He also advised them to “skill themselves to attain perfection in their chosen fields in order to succeed in life.”
Land donor Tana Bado, the college’s Principal Dr MQ Khan, and union advisor Tai Tugung also spoke.
Mein also took stock of the infrastructure development in the college campus. A multicultural dance was also presented as part of the day’s event.
Among others, Doimukh MLA Tana Hali Tara, Papum Pare SP Jimmy Chiram, government officers, and faculty members of the college attended the function. (DCMO)