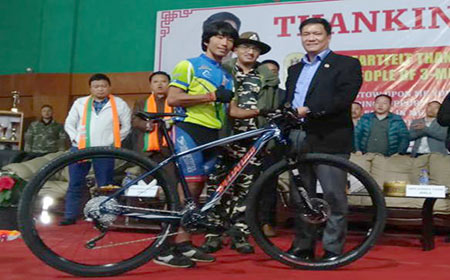 Staff Reporter
TAWANG, Nov 1: In what could be termed a peculiar development, ace Mountain Terrain Bike (MTB) cyclist Tajum Dere, of Shi-Yomi district, had his bicycle taken back by MTB Arunachal’s director, Rajesh Thakur, accusing Dere of breaching the contract agreement between him and Dere.
Thakur, who is also a commandant in the SSB, had presented the MTB to Dere in Jang, in Tawang district, on 8 August, through Chief Minister Pema Khandu. On 10 August, Thakur called Dere for signing an agreement stating that Dere (second party) “shall intimate or seek approval from the first party (Thakur) in case of endorsements, advertisements and sponsor, if any.” It also said that, in case of non-performance by the second party, the cycle and accessories could be taken back by the first party.
When contacted, the MTB Arunachal director claimed that he did not take the cycle, and instead, Dere had himself come to him and insisted on returning the bicycle.
Dere, a resident of Mechuka, is also known as ‘Mechuka Bruce Lee’ for his mastery of martial arts techniques and styles. A self-trained cyclist, he was the runner-up in the MTB Arunachal race, from Itanagar to Mechuka, in November 2018. He also won the 4th position in the international solo category in the MTB Himalaya race to Ladakh.
It is alleged that Dere’s participation in the MTB Himalaya race did not go down well with Thakur. After the event, in October, Thakur allegedly texted Dere on WhatsApp, saying, “In view of the breach of agreement between you and me, I will now have to take back the bike given to you.”
Thakur clarified that it was a just scolding to discipline Dere, to ensure that his future progressed in the right way.
“I had asked him not to participate in the MTB Himalaya race as, if he participated in that event, he would become ineligible for participation in the Cycling Federation of India (CFI) events, the National Games, or representing the country. I had big plans for him and Menjo,” said Thakur.
“The CFI, in fact, has banned all cyclists who participated in MTB Himalaya from all UCI events. In such a case, a big setback to a cycling career is imminent. Even the Army team is not participating in MTB Himalaya – even their own boy, Devender Thakur, is no longer participating in the MTB Himalaya,” Thakur added.
“I am a free rider; it was my dream to participate in MTB Himalaya. I have nothing to do with the tussle between MTB Himalaya and the Cycling Federation of India,” said Dere, responding to Thakur’s statement.
Thakur further claimed that he had bought the MTB out of pocket and gifted it to Dere.
“In the last CFI race, MTB Leh, I had forced the CFI to give entry to Menjo and Tajum, along with free air tickets to and fro, as well as food and stay.
“I had told Tajum that I intended to take leave and seek forgiveness from the CFI on behalf of the two offending cyclists,” Thakur claimed.