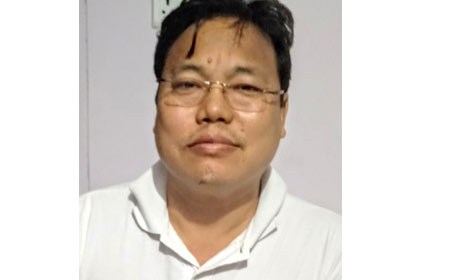 PASIGHAT, Nov 1: PWD executive engineer Tameng Jamoh passed away aged 51 on Friday afternoon in Dibrugarh (Assam) after a brief illness. He was serving the PWD’s Pasighat division, under Boleng civil circle.
Jamoh had joined government service as an assistant engineer in the PWD in 1991, and served at various places. He was promoted to the post of executive engineer in May 2015.
Condolences are pouring in from various quarters in the wake of the news of Jamoh’s demise.
“I fall short of words to express my grief at the sad demise of our beloved Jamoh Sahab,” said Pasighat East MLA Kaling Moyong in his condolence message.
“May his soul rest in peace,” Moyong said, and conveyed his condolences to the bereaved family.
Pasighat West MLA Ninong Ering also expressed grief over the sudden demise of Jamoh.
“I am shocked to hear the news of the untimely demise Jamoh,” Ering said, and expressed condolences to the bereaved family.
East Siang DC Kinny Singh in her message said: “It gave me a shock to realize that Jamoh is no more. I am sure his vivacity will inspire all of us who had the privilege of Jamoh’s association.”
Former education minister Bosiram Siram also expressed shock and grief.
“We have lost one of the best teachers we had ever met. I personally have lost a great human being,” Siram said, and prayed to the almighty to bestow courage and strength to the bereaved family to withstand the tragedy.
The officials of the DC’s establishment organized a condolence meeting in the afternoon, and observed two minutes’ silence as a mark of respect to the departed soul.
DC (in-charge) Tatdo Borang highlighted Jamoh’s contributions. (DIPRO)