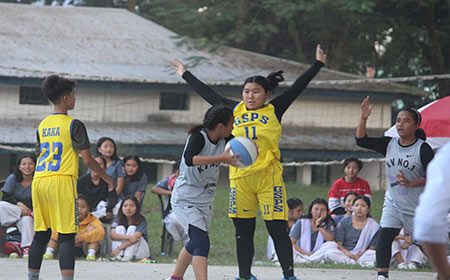 Staff Reporter
NAHARLAGUN, Nov 1: Eleven schools of the capital complex are participating in the first interschool basketball tournament of the state, which began at the Royal International School here on Friday.
The tournament, being organised by the Arunachal Pradesh Basketball Association (APBA), has 16 teams – five girls’ and 11 boys’.
The inaugural match was played between the boys’ teams from Holy Cross School and Don Bosco School, in which the latter won with a whopping 37-8 points.
In a fast-paced match between the boys of RGU Government Middle School (RGUGMS) and Global Academy, the team of RGUGMS won with 16-15 points.
KV No 1 (boys’ team) beat Lekhi Public School with 18-17 points, while Eleazer English School (boys’ team) beat host Royal International School with 8-6 points.
The boys’ team of Model English School also came out on top with 17 points against Donyi Polo Vidya Bhawan’s 4 points.
In the girls’ category, Don Bosco School beat Royal International School with 14-9 points, while KV No 1 won against the girls’ team of Good Shepherd Public School with 12-10 points.
Earlier, inaugurating the event, Arunachal Olympic Association general secretary Abraham Techi said, “basketball is a baby of three years, and if the APBA maintains the spirit, I am sure within the next few years we will have players representing the state in the national and international levels.”
He said the state government is taking active initiatives for the development of sports. He noted that the game of basketball is concentrated in the capital region, specifically in private schools, and highlighted the lack of basketball coaches in the state.
“Most government schools do not have basketball courts. The Arunachal Olympic Association will apprise the government of this matter, particularly the sports department, to introduce the game of basketball in school and college levels,” Techi said.
“However,” he added, “students too have to show their love for the game, so that the government can seriously consider the establishment of basketball courts and recruitment of basketball coaches.”
“I don’t think we have a single basketball coach appointed by the state, and the department has to view it seriously. We should not dishearten the young people that have taken up the sport seriously,” he added.
Arunachal Kick Boxing Association president Bulang Marik and Sangay Lhaden Sports Academy Principal Komen Zirdo also lauded the efforts of the APBA for promoting basketball in the state with regular events.
Speaking to reporters, APBA president Donyi Ori said, “The APBA aims to make basketball a part of the school curriculum. We hope that the lone sports school, the Sanghay Lhaden Sports Academy, will consider adding the discipline of basketball in the academy and create more opportunities for the state’s basketball players.”
He expressed hope that the education department and the sports department would support the APBA in taking the interschool tournament to the districts for statewide participation.
The quarterfinals will be played on 2 November, and the final is scheduled to take place on 3 November, at the same venue.