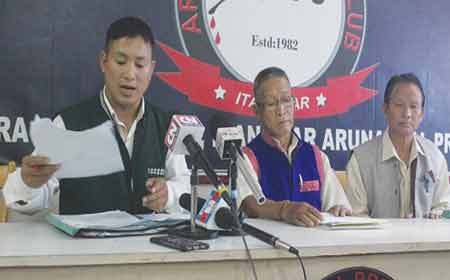 Staff Reporter
ITANAGAR, Nov 2: The state unit of the Bharatiya Kisan Sangh (BKS) has accused the Pema Khandu government of going against the farming community.
Addressing journalists at the press club here on Saturday, state BKS president Takali Tamuk said, “The present state government is going against the state’s farming community by not properly implementing the farmers’ welfare schemes.”
Tamuk said the farmers “are facing lots of problems as the state government is not properly implementing the welfare schemes and not giving compensation to farmers who lost their crops and fields in the recent floods and other natural calamities.”
He said the BKS has been seeking an appointment with the CM for the last few months but is yet to get an appointment.
“The government is not even ready to listen to our pleas. For the last few months we have been seeking appointment, but till date we have failed to meet the CM. The farming community is disappointed,” said Tamuk.
State BKS general secretary Ngurang Tadap alleged that there was “huge mismanagement” of the farmers’ welfare funds in the state.
“In the 2018-19 financial year, Rs 70 crore was earmarked by the state government under the CM’s Sashakt Yojana, out of which Rs 55 crore has been allocated for implementation of the schemes. But it was recalled by the state government before the election,” Tadap claimed.
He went on to claim that while Rs 40 crore had been earmarked under the CM’S Krishi Samuh Yojana, only Rs 10 crore was allocated for implementation, before the government recalled that amount also.
Tadap urged the government to come out with the reasons behind recalling the sanctioned amounts, and also demanded early release of the farmers’ welfare scheme funds.
This daily attempted to contact Agriculture Secretary Bidol Tayeng for comment but was unable to reach him.