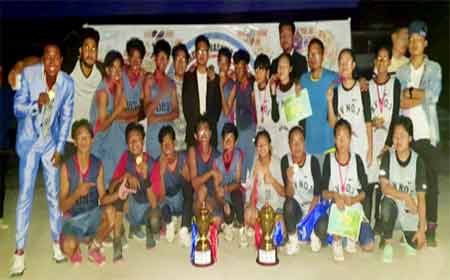 Staff Reporter
NAHARLAGUN, Nov 3: The boys’ team of Don Bosco School and the girls’ team of KV No 1 became the recipients of the state’s maiden interschool basketball tournament trophies after defeating their opponents in the finals held at the Royal International School here on Sunday.
In the first match of the day, the girls’ team of Good Shepherd Public School had taken a decent lead of 15-9, but the team of KV No 1 managed to chase the points and won 19-18.
In the final match, the boys from Don Bosco School took a strong lead against the KV No 1 boys to remain on top till the last buzzer, and won with 57-37 points.
In the girls’ category, KV No 1’s Akanksha Sorang was awarded the most valuable player (MVP) award, while Toni Dui of Don Bosco School was awarded as the MVP in the boys’ category.
The other runners-up were also awarded medals and commendation certificates.
Earlier in the day, Arunachal Pradesh Basketball Association (APBA) president Donyi Ori said the competition at the school level “aims to prepare players for higher levels of competition,” adding that the APBA would conduct “a university-level basketball competition next year to encourage more players.”
He also sought the help of the education department and the Sports Authority of Arunachal in organising basketball tournaments in the districts to scout for as well as create more players.
Reiterating the need to introduce basketball in the Sangay Lhaden Sports Academy, Ori said the APBA would hold talks with the academy’s principal and the sports director to consider the proposal.