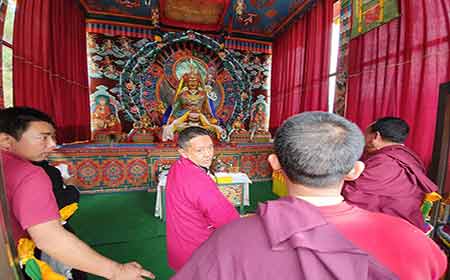 MECHUKA, Nov 4: Legislative Assembly Speaker PD Sona on Monday unveiled the statue of Guru Lhuhe Rigzin in the premises of the Samten Choeling monastery here in Shi-Yomi district.
The speaker inaugurated the statue in the presence of Rinpoche Dzogchen Tilku Thinley Norbu, the Mechuka ADC, and others.
The approximately 10 feet tall statue was constructed by Rinpoche Norbu, with sponsorship from well-wishers.
Kiba Onge highlighted the importance of erecting the statue of Guru Lhuhe Rigzin, and spoke about the guru’s life.
Guru Lhuhe Rigzin is one of the most revered teachers in the Buddhist religion, and it is expected that the statue would attract more visitors, especially the followers of Buddhism, to Mechuka.
Meanwhile, Sona expressed serious concern over the garbage menace in Mechuka’s township area. He, along with PWD engineers
and other officials, later visited the proposed site for waste disposal, where Sona directed the officers to “immediately prepare a detailed project report, along with map, for the same.” (PRO)