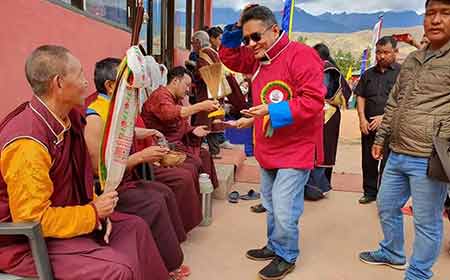 MECHUKA, Nov 7: The Shi-Yomi district administration has begun preparations for the 8th edition of [email protected], which is scheduled to be held here later this month.
Addressing a ‘preliminary preparatory meeting’ here on Thursday, Legislative Assembly Speaker PD Sona sought cooperation from all stakeholders to make the annual event a grand success.
“Though [email protected] has already achieved its primary objective of creating brand visibility and recognition for Mechukha as one of the key tourist hotspots in the country, the focus of the festival this time would not be on a single high-impact or short-duration event but on organizing a series of events throughout the calendar year,” said Sona, who is also the local legislator.
He said the move would not only make Mechukha a year-long tourism destination “but also help the area project its seasonal variations and breathtaking natural landscape to the outer world.”
The speaker expressed grave concern over last year’s incident, in which a few tourists were allegedly attacked, and appealed to everyone concerned to ensure that no such episode is repeated.
Sona also informed that the dates of the festival this year would be extended due to it coinciding with the International Tourism Mart. [email protected] is normally held from 23-25 November. Sona said the new dates will be fixed and announced in due course.
Festival director Moji Riba presented a detailed overview of the event, and informed that, following up on feedbacks and suggestions from stakeholders and well-wishers, the organizing committee has decided to “restructure the festival from this year onwards.”
Shi-Yomi DC Mito Dirchi, SP Gothombu Dajangju, Mechuka ADC Bairo Sorum, and District Tourism Officer Rita Yorung also spoke.
Besides HoDs, personnel from the Indian Army and the ITBP also participated in the meeting and offered suggestions.
Earlier in the day, Sona attended the valedictory function of the four-day statue consecration ceremony of Guru Lhuhe Rigzin at the Samtem Choeling monastery. (PRO)