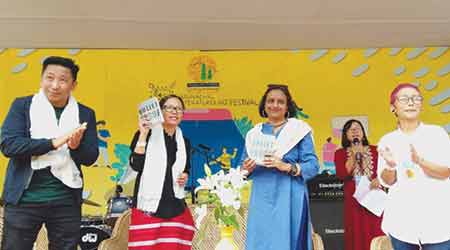 ITANAGAR, Nov 10: “Journalists here (Northeast) work without any support system. There is no legal, social or psychological support. We are on our own and it’s always a lonely battle for us,” said the author of Bulletproof: A Journalist’s Notebook on Reporting Conflict, Teresa Rehman.
She was in conversation with senior journalist Tongam Rina on the final day of the 2nd edition of the Arunachal Literary and Art Festival (ALAF), at IG Park here, on Sunday.
An award-winning journalist with 20 years of experience to her name, Rehman has reported vastly on the conflicts in the Northeast region.
Explaining more about her book, Rehman said, “We were never told what to expect when you go reporting to a conflict zone. I only had a pen and a notepad as equipment, and my intuition. This book talks about the life of a journalist and the trauma of a journalist, and not only about the physical dangers. When we see and report violence, it also affects us. Through this book I am trying to tell my story and maybe stories of many other journalists reporting from this region.”
She advised media students to “know what to expect when they go reporting,” and also pointed out that most of the national media houses expect their correspondents to report on conflicts and are rarely interested in stories that talk about the cultures, foods and the people of the region.
“Because conflict sells,” Rehman said.
Rina recommended Bulletproof… to media students, teachers and journalists.
“It is a handbook not only on safety but about the Northeast region,” she said.
The event also saw the launch of Rinchin Choden’s second illustration book, Lazy Rinzi Vol 2. Her first book had won her several young children as fans when it was launched in the first edition of the ALAF.
Sitting in for Bengia Tolum, who wrote Tou Lvn, Sanju Dodum explained that “the book speaks of the legend associated with the Rikam Pada song of the Nyishis.”
Later, Streamlet Dkhar, Takop Zirdo, Tony Koyu, Wanglit Mongchan and Taro Sindik engaged in a discussion on the indigenous languages, during which each panellist spoke on the importance of preserving the indigenous languages; the difficulties in developing correct alphabets and sounds while writing in the unmodified Roman script; and the need for people’s support in developing scripts to keep the indigenous languages alive.
Theatre artist Riken Ngomle and writer Danish Iqbal had a detailed discussion on drama and theatre and their relevance in the society, which was followed by questions from audience members interested in the field of theatre.
Later, Tagang Taki was awarded with the ALAF Lifetime Achievement Award, which was followed by a musical performance by the Bottle Rockets India.