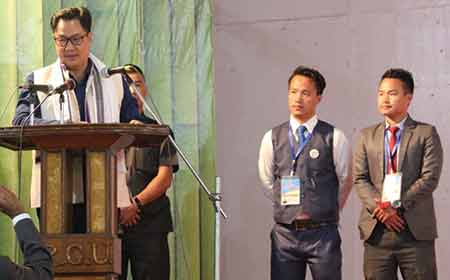 RONO HILLS, Nov 10: The 20th Uni-Fest of Rajiv Gandhi University (RGU) concluded at the university campus here on Sunday.
Addressing the valedictory function, union MoS for Sports & Youth Affairs, Kiren Rijiju, emphasized the need for creating a pan-Arunachal identity, and said “it should start from RGU to set an ideal example.”
The union minister also advised everyone to maintain their health and fitness.
“Shining in sports activities is possible through the culture of fitness, beginning from home and community level to university,” he said.
RGU Students’ Union president Dopum Sonam in his speech urged the university’s students to “keep themselves updated in the modern age of digitalization to remain ever competitive.”
The theme of this year’s Uni-Fest was ‘Striving towards digitalization’. The participants had been divided into four houses – Wi-fi House, 4G House, Cashless House, and Smart Class House.
Different literary, sports and cultural events were organised during the festival, which saw wholehearted participation of the university’s students and faculty members.