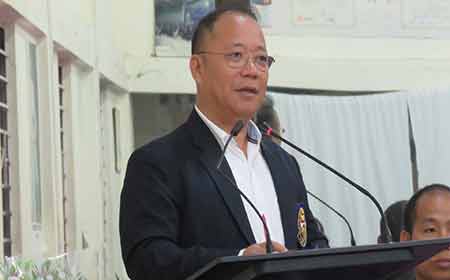 Staff Reporter
ITANAGAR, Nov 12: Karate Association of India (KAI) president Likha Tara has added another feather to his cap by becoming the vice president of the Commonwealth Karate Federation (CKF).
Tara is the second from the country, and the first from the Northeast, to occupy such a high post in world karate arena.
The CKF, headquartered in Canada, offered the post to Tara on 6 November. Tara was inducted into the CKF based on the impressive performance by the Indian karate players under his leadership in the recent past.
It is pertinent to mention that Raja Yangfo had beaten the world champion in his weight category in the Asian Karate Championship conducted in Kazakhstan by the Asian Karate Federation two months ago.
India’s top karateka, Pranay Sharma, also performed brilliantly in the championship, which resulted in India’s massive improvement in the world karate ranking.
India has jumped 60 places to the 80th position in the latest world karate ranking.
Sports Minister Mama Natung in a function organized by the sports & youth affairs department here on Tuesday felicitated Tara on his achievement, and expressed hope that “karate in India would achieve greater height under Tara’s leadership in the days to come.”
A state gold medal recipient in 2005, Tara, a 7th dan black belt, had served as a police officer from 1982 to 2003. He was also the karate instructor at the Police Training Centre in Banderdewa from 1989-1998, and had served as the vice chairman of the Sports Authority of Arunachal from 2012 to 2015.
Tara, who is also the president of the Arunachal Karate Do Association, has been working silently for the promotion and development of karate in the state for the last 38 years, along with his team of dedicated officials.
He was appointed twice as a technical committee member, in the 33rd and the 34th National Games, held in Assam and Jharkhand, respectively.
Tara was also the Team India coach for the Senior World Karate Championship, Austria (2016), the 4th Nihon Shoto-Kan Karate Federation’s Asian Karate-do Championship, Sri Lanka, the 12th AKF Senior and the 13th Junior & Cadet Championship, Dubai, UAE (2013), and the 9th World Karate Federation, Junior, Cadet and U-21 Years Championship, Indonesia (2015).
He was also appointed as an official during the WKF World Senior Karate Championship held in Madrid, Spain, in 2018, and is the first person from Arunachal to participate in a karate training camp in Japan (in 2000).