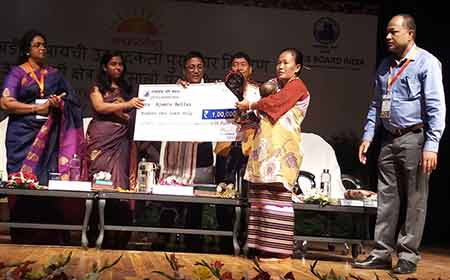 Staff Reporter
ITANAGAR, Nov 13: ‘Arunachal is on its way to become the highest producer of large cardamom in the country,’ said state minister for agriculture, horticulture, animal husbandry, veterinary & fisheries TageTaki during the regional seminar on spices in North-eastern region organized by the Spices Board India at DK Convention Hall here on Wednesday.
“Arunachal has already become the second largest producer of large cardamom in the country. The SBI and all stakeholders should work together so our state becomes the highest producer of large cardamom in the years to come and thereby meet the entire domestic and international consumer demands,” he stated.
While lauding the SBI for its efforts towards encouraging state’s large cardamom growers and making spices one of the major earning sources, the Minister urged the Board to also put similar thrust on production of other spices like black pepper, cardamom, chilli, ginger and turmeric in the state.
The Minister further pointed out the issue of animals damaging cardamom plantations and appealed to the Spices Board India to consider implementing scheme for protection of large cardamom plantation by providing farmers assistance for laying fencing around their plantation.
He further emphasised the need for government agencies to promote Farmer Producer Organization (FPO) so that the economic activities of the farming community increase without involvement of middlemen and help the farmers to harness more profit. He also appealed the Govt. of India to take efforts to control the fluctuation in prices of large cardamom and to ensure stable price for the growers.
He gave away the Spices Board India (SBI)- initiated ‘Excellence in Large Cardamom Productivity Awards’ for the year 2016-17, 2017-18 and 2018-19, to country’s progressive large cardamom growers on the occasion.
The first prize carries a cash award of Rs. one lakh, a citation and a certificate while two second prizes carry a cash award of Rs. fifty thousand, a citation and a certificate each.
For 2018-19, first prize went to Ajumlu Bellai from Tafraliang village in Anjaw district. Second prize winners are: Basan Rai from Lolegaon, West Bengal and Tuk Yania from Tazgi village, Lower Subansiri district of Arunachal Pradesh.
Certificates of merit were also handed to AM Nath Poudyal from Ptiew, Sikkim and Dhan Kumar Gurung Near South Regu School, Sikkim on the occasion.
For 2017-18, Nima Nampo from Rahung village of West Kameng district won the first prize. Second prize went to Choden Lepcha from Lingdem village, Sikkim and Jongnem Tangha from Longkey village, Changlang district of Arunachal Pradesh.
First prize for the year 2016-17 bagged by Luki Lepcha, an innovative large cardamom grower from Lower Rongong in North Sikkim district. Second prize went to Mandhoj Gurung from Upper Ladam, Kalimpong, West Bengal and Neelam Rena from Deed Village, Arunachal Pradesh.
He also handed over a UKB dryer developed by Padamshree Dr. Uttam Kumar Bharali and funded by SBI to Subansiri Spices and Agro Producer Company Ltd., Ziro, a Spice Farmer Producer Company (SFPC) promoted by SBI.
In his address, Spices Board India (SBI) Research and Development director Dr. AB Rema Shree informed that in the past three years, farmers from the state have recorded commendable achievement with regard to large cardamom productivity.
Underscoring the objective of the regional seminar on NE species, she said that through the seminar the Board aims at disseminating knowledge on improved production, post-harvest technologies in spices, to identify the gap between the cultivation, processing and marketing of spices and to draw a roadmap for the further strengthening and development of spices in the NE region.
In his address, state secretary agriculture and horticulture, Bidol Tayeng said that with promotion of spice cultivation most of the state’s vast wasteland covered by shrubs has been converted into goldmines.
“The economic condition of people living in border areas has considerably improved due to its cultivation. In some districts, where farmers were engaged in cultivation of opium illegally, have currently given up its cultivation and taken up large cardamom cultivation instead,” he stated.
Spices Board India finance director A Shainamol, informed that India is producing 9 million tonnes of spices and of this, only 13 percent has been exported to about 160 countries.
“Of this 9 million tonnes, Northeast produces around 7 lakhs tonnes,” she added.
She however, pointed out some of the challenges which the SBI is currently facing including not having high yielding and disease-free variety of planting materials besides, processing and storage knowledge in post-harvest management, transportation bottlenecks and marketing linkages which she termed as major roadblocks towards more productivity.
Further, citing the ministry of agriculture’s policy of doubling exports by 2020 through forming of farmer clusters at district level especially, to focus on export of agri. products, she urged the state minister for agri., horti., animal husbandry, veterinary & fisheries to send similar proposal to the ministry at the earliest.
Meanwhile, the department of agriculture & horticulture, GoAP in collaboration with agricultural and processed food products export development authority (APEDA) is organising a conference-cum-International Buyer- Seller Meet at the same venue here from 14 to 15 November.
10 international buyers from the South East Asia, Gulf Countries and SAARC countries are participating in the event. Apart from the importers and exporters, progressive farmers/grower groups from NER will also participate in the event and interact with the exporters to find out the prospects and requirements of the buyers.