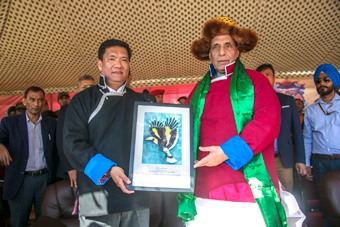 Maitree Divas gets underway
TAWANG, Nov 14: Defence Minister Rajnath Singh on Thursday described the people living on the borders as “no ordinary citizens but India’s strategic assets,” and said the road to a “new India,” as envisaged by Prime Minister Narendra Modi, “runs through a new Northeast.”
Speaking during the inaugural function of the Maitree Divas celebration here, Singh said the people living in Tawang “are important to the country strategically.”
The two-day Maitree Divas is celebrated to boost the civil-military friendship in the region bordering China.
The defence minister noted that the people of the Ladakh region had given the first information about Pakistan’s infiltration into Kargil.
“This is why I say that the people living on the border here are not ordinary citizens, but they are our strategic assets. I don’t consider citizens living on the Sino-India borders ordinary citizens,” the defence minister said.
He said the Centre is working on creating a Northeast industrial corridor to develop Arunachal “as a land bridge to South East Asia, which would create employment, trade, and tourism and economic opportunities.”
Singh, who was on his first visit to Tawang, said he was “deeply affected” by the event, and lauded the initiative.
“The patriotism among the people here is clearly visible, and the relationship between the ordinary citizens and the armed forces is very deep,” he said, and urged the youths to join the armed forces in large numbers.
“Along with Arunachal Pradesh, the whole of Northeast is very important for India strategically. Arunachal is surrounded by three countries. This state acts as a gateway to the ASEAN countries and South-East Asia,” he said.
Lauding the state for preserving its social and cultural heritage, the defence minister described Arunachal as “a role model for other states of the country.”
“Tradition and modernity walk side by side here,” he said.
Underling the government’s commitment to improve connectivity in the border areas, Singh said the approval to construct a tunnel through the Sela Pass to Tawang, making the Pasighat airport operational, the nod to set up the Hollongi airport, and the work to establish three strategic railway lines in the region are some of the decisions in that direction.
“Arunachal has a bright future under the leadership of Chief Minister Pema Khandu, whose tirade against corruption will take the state to new heights of development,” he said.
Singh said his ministry would see to it that “Arunachalee youths would have special opportunity to work with the Indian Army.”
He also informed that a ‘sena sampark’ centre is being proposed to be established in Itanagar, under a brigadier, “offering a single-window opportunity to be heard on any issue.”
The minister also said his ministry is proposing to identify and develop tourism hotspots in Arunachal with assistance from the Indian Army posted in the border areas.
The two-day socio-military cultural event is jointly organised by the Indian Army, the district administration and volunteers at the high-altitude stadium here. ??Khandu in his address said the bonhomie shared by the civilians and the Indian Army in Tawang “is exemplary, and the kind of cooperation extended between the civil administration, the public and the Indian Army can be seen nowhere else in the country.”
“The presence of the Indian Army in the border areas of Arunachal has contributed a lot to its development,” Khandu said. “Wherever civilian administrations are unable to reach out to people for medical assistance, education and for distress help during natural calamities, the Indian Army has always proved to be of great assistance.”
The CM said the “people of Arunachal have always been patriots whose patriotism is second to none.”
He remembered the freedom fighters from Arunachal, such as Matmur Jamoh and Moji Riba, and paid tribute to late Havildar Hangpan Dada.
Colourful cultural programmes and war drills were presented by the local cultural troupe and the Army, respectively.
Earlier, the CM and the defence minister visited the war memorial, where Singh paid tribute to the war heroes of the Indian Army who died fighting for the country in 1962.
Singh also visited the Tawang monastery. (CMO & PTI)