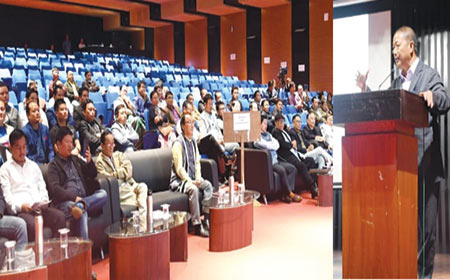 ITANAGAR, Nov 20: After threadbare discussion with various stakeholders, the consultative committee on Citizenship (Amendment) Bill (CAB) has made a two-point recommendation to the union government for consideration.
The committee has made it clear that “Arunachal Pradesh will unequivocally oppose the CAB, 2016 (Bill No 172 of 2016) subsequently marked as Citizenship (Amendment) Bill 2019 (Bill No 172-C of 2016).”
The committee recommended that “for Arunachal Pradesh, all the provisions of the Bengal Eastern Frontier Regulation, 1873 (Regulation 5 of 1873 and provisions of section 22,23,38 and 40 of the Chin Hills Regulations, 1896 (Regulations No 5 of 1896) shall be deemed to have been enacted under this act and shall have effect accordingly, and that the provisions of this act shall not be applicable to any person who has been residing in or has entered or may enter the state of Arunachal Pradesh in violation of the BEFR, 1873 on the aforesaid or the aforesaid provisions of CHR 1896 or the Criminal Law Amendment Act, 1961 (Act no 23 of1961)as amended from time to time.”
On Nov 20, Home Minister Bamang Felix, who is also the chairman of the consultative committee on CAB 2019, along with the members of the committee held a final meeting with representatives of all the political parties, community based organisations, student organisations, youths, etc prior to sending the recommendations of the committee to the Union Home Ministry.
Earlier, the committee in a meeting held with the stakeholders, had sought their suggestions, views and opinions on the proposed bill.
The committee after taking into account the interest of the indigenous people and considering the suggestions of the stakeholders came up with the two-point provision.
The Home minister also informed that “Chief Minister Pema Khandu in his cabinet meeting had thoroughly discussed the recommendations of the consultative committee which has taken into consideration the suggestions of all the stakeholders, prioritising the sentiment and safeguarding the rights of the indigenous people.”
During the meeting, the Home minister stressed that it is necessary that “the recommendations be shared with all that represent the voice of the state before sending it to the Central government.”
He reiterated that “the state government led by the chief minister will never go against the will of the indigenous people of the state.”
Representatives from the North East Students Organisation stressed that the organisation will continue its stand against the bill despite the incorporation of the provisions in the bill.
Arunachal Indigenous Tribes Forum president Bengia Tolum stressed that the National Register of Citizens of India should be incorporated, claiming it would help to identify the actual indigenous population of the state.
The Home minister concluded the meeting with the assurance that “the rights of the indigenous people will never be compromised.” (DIPRO)