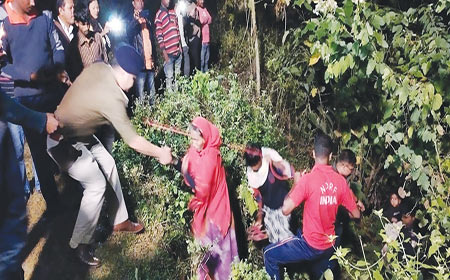 NIRJULI, Nov 20: As many as 27 persons, including 11 children were stranded in the middle of the Dikrong River near Dikrong village here due to sudden release of the Pare Dam water on Wednesday evening.
The stranded people, also including 11 females, are members of labour families, who were working in the stone quarry.
On receiving information, the police and 12 Bn NDRF, in a joint operation, rescued all the stranded persons from the middle of the river.
According to information from Capital SP Tumme Amo, “after receiving information that few people were trapped in the Dikrong River near the old hanging bridge connecting Nirjuli and Doimukh
at Dikrong village due to sudden release of water from Pare dam, a team of the Nirjuli unit police rushed to the spot immediately and contacted the 12Bn NDRF. The police team, including ASP Sumit Kr Jha, Nirjuli PO OC Inspector Tadu Hassang, ASIs Kenter Tacha and Tana Tadu and the NDRF team rescued them safely.”