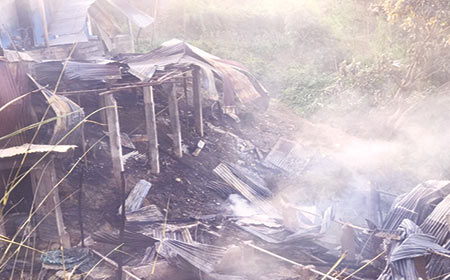 Gohpur, Nov 23: Four persons were charred to death in a fire that burned down the MIBT house of one Ha Tasang at Dokioso Colony, behind the Bomdila hotel here, at around 2:30 on Saturday morning.
All of the deceased were members of the same family. They have been identified as Ha Tasang (35, father), Ha Yaning (30, mother) and their daughters aged eight and six years old.
DDMO Moromi Sonam informed that the victims were originally from Pipsorang, in Kra Daadi district. Sonam informed that a Tempo taxi was also completely gutted in the fire.
The SPT house of one Sorang Tapung was partially damaged, and his son Sorang Taro’s MIBT house, too, was burnt down completely. The DDMO said one scooter was also burned in the fire.
The capital complex administration acted immediately upon receiving news about the incident, and fire tenders reached the spot and doused the flames.
Disaster Management Secretary Dani Sulu, Capital Complex DC Vikram Singh Malik, Fire & Emergency Services SP Romil Baniya, and Capital SP Tumme Amo inspected the spot.
EAC Dakli Gara informed that relief assistance and ex gratia will be handed over to the affected family as per the SDRF norms and guidelines after the losses are assessed. (DIPRO)