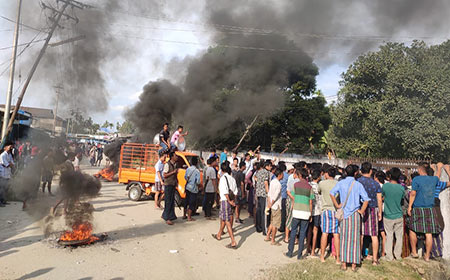 Staff Reporter
ITANAGAR, Nov 23: There are reports of clashes between Adis and Khamptis in Namsai leaving several people injured while a 12-hour bandh was underway in the district on Saturday.
The police later managed to control the clashes with tear gas, and fired shots in the air to disperse the mobs. The injured were also taken to the hospital for treatment.
The bandh was imposed by the All Tai-Khamti Singpho Students’ Union (ATKSSU) and the All Namsai Area Youth Association over alleged police inaction and failure of the police to register an FIR lodged on 28 October against instigators of violence in the district.
Meanwhile DGP RP Upadhyaya has dispatched seven officers of the state police to Namsai, in view of the escalating violence. Upper Siang SP Neelam Nega, DSPs Techi Susen and GN Aka, and Inspectors T Bage, T Messar, Nabam Had and Passang Simi have been directed to report to the DIGP (eastern range), Namsai.
On Friday, responding to a memorandum submitted by the Adi Students’ Union (AdiSU), Namsai DC B Talukdar in an order said “the police have been on the job since registration of case, and the matter is in court.”
The AdiSU had sought the arrest of those involved in the arson in Mabira village.
The DC further said that “providing relief and rehabilitation to the affected families of Khai Nalla cannot be entertained as the affected families constructed houses in reserve forest area and therefore not within the authority of the deputy commissioner.”
Talukdar, however, said the police have ensured security for the affected families.
Meanwhile, the Women Welfare Society (WWS) Namsai is seeking the arrest of one Buteng Tayeng for instigating violence between the two communities by spreading a video.
WWS Namsai president Shristhi Maio, who was assaulted by a friend of Tayeng’s, informed that Tayeng and his friends came to a barricade point with a child patient at around 2:30 pm. The WWS members suggested that the patient be taken to the hospital in the police vehicle instead of in their private vehicle, in view of security concerns, and the mother and child were then escorted into a police vehicle with a female police.
“However, just as the father got down from his motorcycle to join his wife and son, Tayeng began taking videos, and made it appear like we were not allowing them to pass at all.
“All this happened in front of two police personnel, who did not do anything to stop them. The situation escalated from there and snowballed into a fight,” Maio said.
Meanwhile, the Tai Khamti Singpho Council has urged all concerned, including the Adi Baane Kebang, to “restrain and work together towards bringing normalcy, maintaining peace, tranquillity and harmonious coexistence among all communities in Namsai.”
Tension has been simmering between the two communities after 14 houses were burnt down in Mabira, a new village near Khai-Hay Nallah, under the Tengapani reserve forest area, between 12 and 15 October.
On 26 October, a peace rally taken out by the AdiSU, demanding immediate arrest of the culprits involved in the New Mabira village arson, turned violent as the protestors and police clashed.
The AdiSU in its representation to the deputy commissioner accused a few members of the ATKSSU of being responsible for the arson and demanded their immediate arrest.
The ATKSSU has denied any involvement in the incident.
With tension between the two communities continuing for over a month now, questions are being raised about the lackadaisical role of the district administration and the state police, who have apparently been unable to gauge the situation.