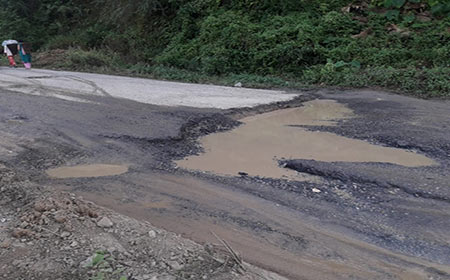 PANGING, Nov 23: A portion of the Trans-Arunachal Highway between Pangin and Kebang villages in Siang district is in a deplorable condition.
The stretch of the road was constructed some three or four years ago, but the highway department has apparently failed to maintain it. Commuters are facing hardship, and the potholes on the road have reportedly damaged vehicles.
The road is the lifeline of five districts: Siang, West Siang, Leparada, Shi-Yomi, and Upper Siang.
The condition of the road between Pangin and Aalo is also terrible, and the public, particularly patients, are facing immense difficulties. It takes two hours to travel the 30 km length of the road.
It is understood that despite maintenance fund having been allocated to the highway department, the people are yet to get a better road, and complaints have been made to the authority concerned by the public of Pangin and Aalo on many occasions.
On the other hand, the BRO is taking a long time to complete the 17 km stretch of the highway from Pangin (Sanggam) to Boleng. It has been five years and the BRO is still constructing this portion of the road.
This road is strategically important as it connects to the border outposts of Tuting and Gelling, in Upper Siang district, near China.
It is understood that after joining as the DC of Siang, Rajeev Takuk is making all-out efforts to accelerate the construction of the highway.