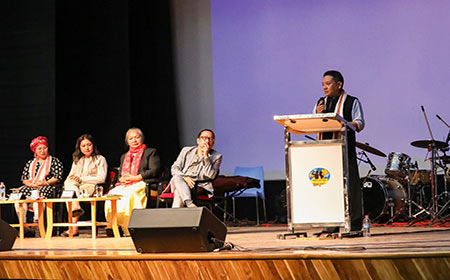 ITANAGAR, Nov 23: Legislative Assembly Speaker PD Sona on Saturday said the role of community-based organizations (CBO), student organizations and other NGOs “is very important for social reformation in the state, for the government agency alone cannot do that.”
The speaker said this during a panel discussion on ‘Tribal customary law & women’s rights in India’s Northeast’, organized jointly by the Ngurang Learning Institute (NLI) and the Arunachal Pradesh State Legal Services Authority (APSLSA) at the Dorjee Khandu convention hall here.
“Be it a social menace, rights of women and children, or any other society-related issues, the CBOs should come forward and act upon it, so as to bring tangible and meaningful results,” Sona said.
Expressing concern over the mushrooming of organizations “just to make their ends meet,” he said the responsibility of organizations, particularly CBOs, “should be to help the society evolve, as things cannot remain unchanged.”
Lauding the NLI, Sona said such initiatives would go a long way and be helpful in bringing changes in the society.
Earlier, the panellists – socio-political activist Jarjum Ete, human rights activist Hasina Kharbhih, and
DNGC Associate Professor Taw Azu – spoke on the topics of the discussion. The trio spoke on polygamy and its implications on the tribal society, and women’s rights related to land, property, inheritance, and such.
The session concluded with an agreement that some of the customary laws of the tribal society are prejudiced and need to change, so as to give equal rights to the women.
The panel discussion was moderated by RGU Assistant Professor Moji Riba.
Among others, civil rights activist Irom Chanu Sharmila, her husband Desmond Anthony Coutinho, and APSLSA Member Secretary Budi Habung attended the event. (PRO)