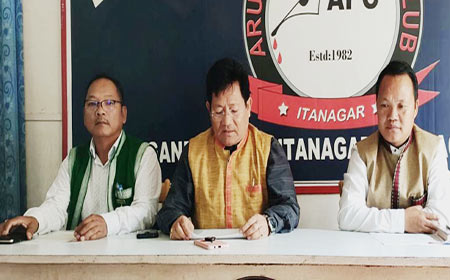 ITANAGAR, Nov 23: Donyi Polo Cultural & Charitable Trust (DPCCT) chairman Katung Wahge has said the trust is going to construct a common prayer hall in East Siang HQ Pasighat, which will be known as Donyi Polo Khumko.
Addressing journalists at the Arunachal Press Club here on Saturday, Wahge informed that the foundation stone for the prayer hall would be laid on 1 December, to coincide with the Indigenous Faith Day celebration.
He said the 7th Kyabje Yongzin Ling Rinpoche, the spiritual advisor to the 14th Dalai Lama, and International Buddhist Confederation secretary-general Dr Dhammapiva would also attend the event.
“Chief Minister Pema Khandu along with Sikkim Chief Minister Prem Singh Tamang and former Arunachal governor PB Acharya, besides other ministers from the state will also attend the event,” Wahge said.
He said the trust is also seeking to create educational institutions based on the ancient ‘gurukul’ system of imparting knowledge.
“In the class the students will be provided with the ambience of traditional indigenous way of life along with modern education curriculum,” he said.
Nyishi Indigenous Faith & Cultural Society president Pai Dawe said the five Tani clans of the state, which constitute the major population of the state and share similar cultures and traditions, “felt the need of an institutional mechanism to preserve and strengthen them for posterity.”
“To attain the mission and philosophy for protecting, preserving and promoting the indigenous faiths and the cultural way of living, the DPCCT was shaped under the aegis of the Indigenous Faith and Cultural Society of Arunachal Pradesh to take up all such activity,” Dawe said.