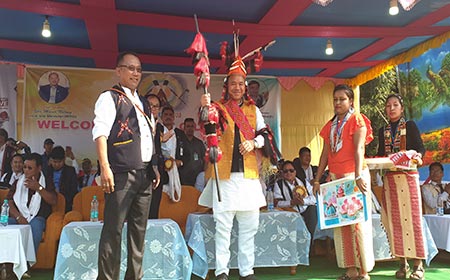 DEOMALI, Nov 25: Hundreds of people from all walks of life celebrated Chalo Loku festival of the Nocte tribe at the general ground here in Tirap district on Monday with great pomp and enthusiasm.
Addressing the revellers, Sports & Youth Affairs Minister Mama Natung said “festivals bring happiness and provide opportunities to rejoice with lots of fun and happiness.”
He commended the Nocte community for maintaining its rich culture and tradition.
“The elders of the community have done a tremendous job in saving the culture and tradition. Now it is upto the younger generation to take it forward,” Natung said.
The minister said more effort should be made to protect and preserve the traditions and cultures of the different tribes of state, so that the tribal identity remains intact.
Expressing concern over the rise in drug addiction, Natung urged youths to shun drugs and take up sporting activities to better their lives.
“The government of India has been insisting on development of games and sports and youth affairs in the state.
The GoI has approved three sports academies for the state, and one has been proposed for the TCL region,” Natung said.
He assured to take up schemes, including for construction of grounds for football and other sporting activities, in the circles and other important areas of the district and the state.
Pakke-Kessang MLA Biyuram Wahge in his address lauded the Nocte people for upholding their tradition, and emphasized on continuing to do so.
He urged the people to protect wildlife, especially the hornbill, describing it as “a symbol of the tribal society.”
PHE&WS Minister and local MLA Wangki Lowang in his address said, “It (the festival) is an occasion when we forget all enmity and differences. We join hands together to celebrate this festival.”
Festival committee president Lapchang Aboh also spoke. Among others, the Deomali ADC, HoDs, and senior civil and Army officers attended the event.
Cultural presentations and traditional games and sports were the other highlights of the day.
DIPRO reports: The 51st Chalo Loku festival was celebrated in Tirap HQ Khonsa on Monday in a simple manner, to express solidarity with the departed souls of the 21 May massacre.
Borduria-Bogapani MLA Wanglin Lowangdong informed that “the festival is being celebrated in a simple manner to show solidarity with and express profound sorrow over the death of MLA Tirong Aboh and 10 others, who were brutally killed by militants on 21 May.”
Greeting the Nocte community, Deputy Commissioner PN Thungon urged the younger generation of the Noctes to preserve, protect and promote their age-old tradition and culture.
He announced to “procure laparoscopic insufflators and ring applicator for the general hospital to aid pregnant women, so that they will not have to travel to Assam or other private hospitals outside the district.”
The DC also released a documentary titled Traditional Marriage System of the Noctes, by Dr Watsen Bangsia.
SP Kardak Riba urged the youths of the district to stay away from antisocial elements and unlawful activities, and to shun smuggling of narcotic substances into the region.
The SP also announced cash awards of Rs 20,000 and Rs 25,000 for the district’s toppers in Classes 10 and 12 in the 2019-20 academic session.
The 51st NCLC president, Gulley Sumnyan, remembered the men who were slain on 21 May, including former NCLC secretary and MLA Tirong Aboh.
Dance troupes from Thinsa, Borduria and Nocte Mothers Federation participated in the festival.