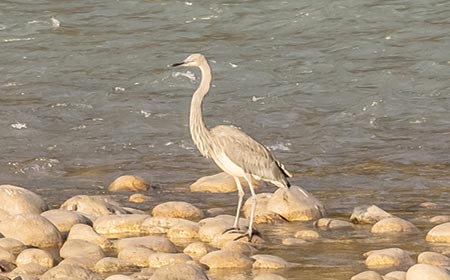 [ Tajum Yomcha ]
In the terms of infrastructure development, Arunachal is briskly evolving with the other Himalayan states in India. Every other day, there is the announcement of new infrastructure development, be it road connectivity, mega dams, mega buildings, development of electricity, etc, and why not? Change is inevitable, and we are all a part of it.
With an area of 83,743 sq kms, Arunachal is the largest state in terms of landmass among the seven northeastern states of India, and stands second in terms of forest cover after Madhya Pradesh.
With this type of green cover, Arunachal is blessed with a diversity of habitats with vast natural resources. We must acknowledge the fact that our state is adorned with beautiful landscapes, pristine river systems, rich cultural heritage, and to top it all, an abundance of rare and endemic flora and fauna it supports.
Topping the rare species of fauna found in Arunachal is the critically endangered white-bellied heron. A bird of around 127 cms height and the second largest heron in the world, it is often referred to as the imperial heron. This bird has a large blackish bill, 15-18 cms long, and is mostly dark greyish, with a white throat, a white belly, and a bent neck. It is a bird under the threat of global extinction, and is listed among the most threatened birds in India and on the globe.
With a total population of 50-249 mature individuals in the world, its population is declining rapidly, and, as a result, the bird is placed on the critically endangered list by the International Union for Conservation of Nature and Natural Resources (IUCN).
As per literatures available, the geographical range of the bird is suggested from the Kingdom of Bhutan, Northeast India, the hills of Bangladesh, and northern Myanmar. This bird is confirmed extinct in Nepal.
By nature the white-bellied heron prefers small or large rivers with clean water and an open riverine area with sand and gravel bed, adjacent to tropical or subtropical broadleaved forests. A very shy bird, they frequent undisturbed and inaccessible areas. Observation made in the Namdapha National Park revealed its shyness as it flies away on seeing anyone approaching it within 500 mtrs.
At the present the bird is found in Bhutan, India and Myanmar. In India, the bird is found only in Arunachal, and the Namdapha Tiger Reserve is home to the critically endangered white-bellied heron. The bird is regularly sighted here on the banks of the Namdapha river, and occasionally near the Dehing river.
A three-year study by the Zoological Survey of India recorded six individuals in 2014. They have also recorded the first ever nesting behaviour of the bird, which is a first record for India and was published in Birding Asia, a reputed scientific journal. However, recent record of this bird in the Kamlang Tiger Reserve in Arunachal has provided some new insights into the availability of this bird in other parts of the state, leaving a scope for carrying out wide-scale surveys in the unexplored areas of Arunachal. At the global level, Bhutan confirms the highest number of individuals of this bird, which is estimated to be not more than 30 individuals.
In India, no studies have been done to ascertain the reason for its population decline, maybe owing to a small population size or lack of awareness among the various stakeholders.
However, studies have projected a declining population trend of the species in the near future, possibly due to anthropogenic pressures (human activities) and also maybe due to some natural causes.
Although the bird is protected under the Indian Wildlife Protection Act, 1972, it is placed under Schedule IV, which means that the bird is fully protected but the contravention penalties are much lower, considering the vulnerability of the species. For maximum protection of this critically endangered bird, its legal status should be raised under the Indian Wildlife Protection Act, so that there are more stringent legal implications, which will help in regulating the conservation of this bird.
More stringent mitigation measures should be adopted for the survival of this bird in its single bastion in India – Arunachal. Historical records of earlier sightings of the white-bellied heron should be resurveyed in detail and research should be conducted in pristine and newer areas in Arunachal. This will help in further development of frameworks for conservation of the species with scientific inputs.
The species requires to be part of awareness and education programmes, both at the department level and among the general masses. Also, strong enforcement of legal protection of the bird should be developed for the survival of the species.
As former secretary-general of the United Nations, Ban Ki-moon, opined: “Sustainable development is the pathway to the future we want for all. It offers a framework to generate economic growth, achieve social justice, exercise environmental stewardship and strengthen governance. Hoping the growth of our state takes place in a sustainable manner too, conserving our natural resources for the future generations.”
For now we play the waiting game. (The writer is a PhD scholar, Department of Forestry, NERIST, Nirjuli.)