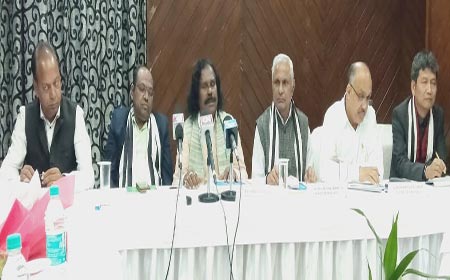 Staff Reporter
ITANAGAR, Nov 27: National Commission for Scheduled Tribes (NCST) Chairman Dr Nand Kumar Sai said that the commission will take up the matter of the Citizenship (Amendment) Bill (CAB) with the Central government “if the state government wishes so.”
Addressing the press shortly after meeting with various stakeholders of the state, including community based organisa-tions, here on Wednesday evening, Dr Sai, and members of the NCST assured, that “the commission will be the first to invite the secretary of the department concerned to hold discussions on the CAB, if needed.”
Dr Sai said that the state government has informed the NCST that there are “strict laws to protect the people of the state and no one can enter the state without permission.”
The commission was also informed that the sentiments of the people regarding the contentious bill has been conveyed to the Centre by the state government.
Dr Sai was hopeful that the Centre would honour the fact that the state’s citizens, the government and the administration share the same sentiments regarding the bill, adding: “The Centre should do what the people want.”
Earlier, the NCST held a meeting with tribal society leaders, NGOs, civil societies working in the field of tribal development, and various other stakeholders to get first-hand information on their living conditions, education, development issues, and problems, if any.
The chairman said that the commission is committed to work for the welfare and security of the scheduled tribes, and noted that measures to safeguard the tribal culture and tradition is needed.
“Since Arunachal is a border state, the security and the welfare is of utmost important. We have studied the socio- economic condition, educational status, road communications and other aspects related to the tribal people,” the Chairperson informed.
The commission also assured that it will take up the proposal of the state government regarding increasing the medical seat intake in the state from 50 to 100, with the Centre, “so that sufficient doctors are produced to serve the state and the nation.”
“We are confident that the centre will agree to our proposal as the infrastructure we have created is according to at least 150 seats,” Chief Secretary Naresh Kumar added.
Further, Dr Sai lauded the efforts of the government in helping the tribal farmers with horticultural crop production and the subsequent increase in income.
However, answering to a query regarding the environmental impact of monoculture practices, the chief secretary said, “We are not promoting one particular horticulture crop. In fact, in the current financial year, we kept a provision for more than Rs 100 crore for a variety of horticulture crops with a bouquet of more than 10 crops. And in the current financial year, we have kept a target of more than 6000 hectar of land for intensive horticulture plantation. We believe that in the next two to three years, Arunachal shall become the basket of temperate fruits for the entire country,” the chief secretary said.
Earlier in the day, the team also met Governor BD Mishra, and held a state review meeting with the chief secretary and other officials. A meeting with the NHPC was also held.
Dr Sai was accompanied by NCST members Harsha Bhai Chunnilal Vasava, Hari Krishna Damor, and joint Secretary Konthang Touthang. (With DIPRO inputs)