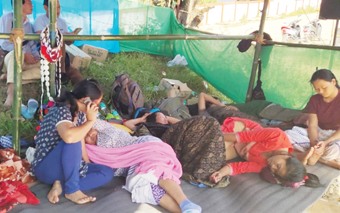 Staff Reporter
ITANAGAR, Nov 28: Two female protesters who on Wednesday joined the indefinite hunger strike jointly launched by the All Arunachal Pradesh Anti-Corruption Students’ Union and the All Yobin Students’ Union at the IG Park tennis court here are reportedly in critical condition.
The protestors have been identified as Chimase Yobin (45) and Akhusa Yobin (54). The doctor has advised the duo to discontinue their hunger strike.
Members of the two organisations are on an indefinite hunger strike, demanding that the state government delete the names of non-APST settlers of Vijoynagar, in Changlang district, from the panchayat electoral roll.