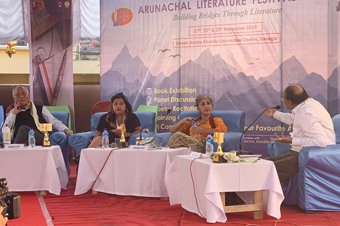 Staff Reporter
ITANAGAR, Nov 28: Bangalore (Karnataka)-based author Anuja Chauhan said there is more creative freedom in writing books than in script-writing.
“Creative freedom is in books, but in script-writing lots of restrictions are there which are not in novels,” Chauhan said, in conversation with Rajiv Gandhi University’s assistant Hindi professor, Jamuna Bini, on the second day of the Arunachal Literature Festival (ALF) at the DK convention centre here on Thursday.
Speaking about her struggle as a writer, Chauhan said “the first book of every writer is always badly treated by the publishers, and every writer has gone through this phase.” She said that in order to convince the publishers, “a writer needs to do proper homework while presenting their synopsis.”
Later, in the panel discussion on the topic ‘Literature and films’, which was chaired by Prof M Venkateshwar, Chauhan said any novel she wrote, when it was adapted into films, “became a different version.”
“Films are diluted versions of writings. Literature doesn’t need cinema, but cinema needs literature,” Chauhan said.
Sahitya Akademi awardee YD Thongchi in his address said while literature is the creation of a lone person, films are creations of groups of people.
“Literature is creation of lone man. A writer creates everything – character, plot, etc – but cinema is creation of group of people,” said Thongchi.
“I always find my novels adapted into cinema (to be) a different version,” Thongchi said, speaking about his novel, Sonam, which has been adapted as a film.
Thongchi also said that films in India are commercialized rather than arty, adding that “there are only a few films that have done justice to literature.”
Thongchi’s book, In the Land of Poison Women, which was adapted by Assamese filmmaker Manju Borah, was later screened. Another panellist, Rain Chudori, from Indonesia, spoke about how literature is being adapted into films in Indonesia.
Bhaskar Dutta Boruah interacted with panellists Ananda Lal Deep Saikia and Teesta Guha Sarkar on ‘The perfect first book: What publishers seek in new writers’, and stressed on publication of “books with originality, independent voice and sensitivity to words.”
They also discussed the dwindling trend in the sale of poetry books.
Exhaustive talks were also held on ‘Challenges in developing indigenous language’, with Ani Taggu, Tony Koyu, Banwang Losu and Lalnungthangi Chhangte participating.
In the poetry reading competition, varieties of poems were recited by Thajom Aboh (in Nocte), Stephen Toku (in Nyishi), Takop Zirdo (in Galo), and other panellists.
Arindum Borkotoky, with panellists Srijana Subba, Chandrakanta Mura Singh, Chador Wangmo and Ajanta, dwelt on the ‘Role of children’s literature in nurturing creativity’.
Panellists Basudev Das, Kamal Kumar Tanti and Jivan Roy stressed on “maintaining the root and originality of the writers” during the discussion on ‘Translation: Transcending the world’.
The event also focussed on the role of children’s literature in nurturing creativity, publishers’ choices, films, poetry reading, and painting competition among young children.
Around 100 participants turned up for the on-the-spot painting competition. (With DIPRO input)