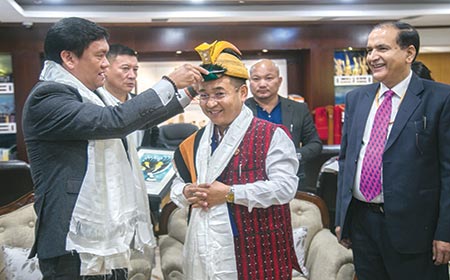 ITANAGAR, Dec 2: Two Himalayan states with abundant natural beauty – Arunachal Pradesh and Sikkim – on Monday agreed to share knowledge of promoting tourism in the states.
The development came when Sikkim Chief Minister Prem Singh Tamang (Golay) called on his Arunachal Pradesh counterpart Pema Khandu here and discussed tourism prospects in both the states.
Khandu said Arunachal has a lot to learn from Sikkim about improving sectors such as tourism, hydropower and agriculture.
At the meeting, the chief ministers also discussed social, political, economic and demographic issues of the two Northeastern states.
Khandu also shared the concern of Tamang expressing that the criteria of central funding on development projects should not be based on population.
The Sikkim chief minister did not attend any public event during his day-long visit to Arunachal.
He was accompanied by Sikkim Power Minister MN Sherpa, Secretary to CM SD Dhakal and other officials. (CMO)