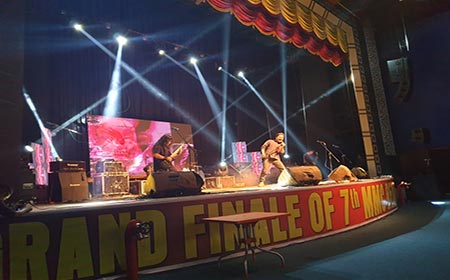 ITANAGAR, Dec 2: Rock band ‘Reloaded’ emerged as the winner followed by Holi Guns as runner-up on Sunday’s grand finale of the 7th Multi-Media Campaign on HIV held at DK Convention Hall here.
The five rock bands from different zones made it to the grand finale. The other finalists were Dormant, Dreame-scape and Down Town.
The winner received a cash prize of Rs. 1 lakh while the runners- up was awarded a cash prize of Rs 50,000.
Health Minister Alo Libang, who attended the function, advised the youth to spread message of HIV/AIDS awareness among their friends and family members. He urged the people to avail the free health care and services provided under health and family welfare department.
“The objective of the MMC is to educate the youth about HIV and other health issues using the platform of music,” he said. Libang emphasized on the need of involving more and more youths in such events.
“Youth are the backbone of the nation. If they are, our nation is healthy,” said Health Services Director Dr M Lego.
Arunachal Pradesh Aids Control Society Project Director Dr Riken Rina said that the MMC on HIV/AIDS is specifically designed under the aegis of the National AIDS Control Society, for the youth keeping in mind that sports and music is in the blood of the people of the Northeastern states.
He informed that the winner of the grand finale will become the Goodwill Ambassador of APSACS and will represent the state at the North East Regional level competition to be held at Imphal Manipur on 18 December 2019.
All the eight north eastern states will compete for the NEMMC.
Later, the health minister gave away cash prizes, certificates and mementoes to all the best performing APSACS staffers.
Mudang Rimung of Bomdila District Hospital received the best ICTC Counsellor award while Pinda Pulu of District Hospital Roing was adjudged as the best Counsellor STI Clinic.
While Dani Rinia of Tawang Distrct Hospital was adjudged as the best blood bank laboratory technician, Mini Varghese of District Hospital Khonsa received the award for the best ICTC laboratory technician.
The APSACS has instituted the awards for its staff to encourage them to work harder.
IEC exhibition related to HIV, tobacco control, drug abuse, TB control programme etc was also organized to mark the World AIDS Day observation.