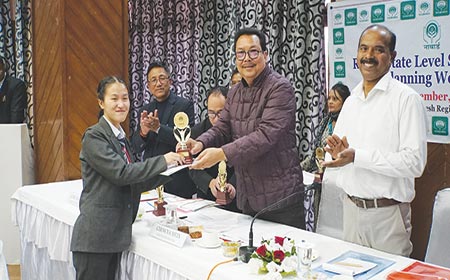 ITANAGAR, Dec 3: Deputy Chief Minister Chowna Mein on Tuesday inaugurated the State Level Sensitization and Planning workshop on Rural Infrastructure Development Fund (RIDF) organized by National Bank for Agriculture and Rural Development (NABARD), Arunachal Pradesh Regional Office here in a city hotel.
Outlining the importance of agriculture and allied sectors in bringing economic development of the people of the state, DCM urged that a certain percentage of allocation under RIDF may be utilized for agriculture.
Mein said that irrigation is the most important sector, which needs to be taken care of.
He suggested that state government will support progressive FPOs through KVKs from the state budget. He also emphasized on sustainable and timely completion of projects financed under RIDF and need for convergence based approach in project implementation so as to drive more benefits to the rural masses.
He appreciated the role of RIDF in development of the state and advised all departments to effectively leverage the low cost financing. He impressed upon the line departments to focus on preparing a complete DPR which is implementable.
“There is a need for setting up of industrial zone in the state of Arunachal Pradesh, for instance in pharma industry, which should in-turn create employment opportunities for the local youth,” said Mein.
Further, DCM urged the implementing departments and NABARD to work in close coordination so that state continues to get optimum benefit.
Agriculture Minister Tage Taki appreciated the contribution made by NABARD for the development of the state and suggested changes in PMKSY as suitable to the Arunachal Pradesh with more emphasis on open channel irrigation. He also highlighted the importance of encouraging allied sectors in the state by acknowledging its potential for doubling farmers’ income.
General Manager/OIC, NABARD Dr Gopa Kumaran Nair underscored the importance of RIDF as one of the major interventions in the state for sustained growth and boosting private investments. He also highlighted the need for timely completion of the sanctioned projects in quality to realize the envisaged benefits of the projects.
He urged the state government to avail other funds announced by the central government, such as Dairy Processing Fund, Micro Irrigation Fund, Warehouse Infrastructure Development Fund, Food Processing Fund and NABARD Infrastructure Development Assistance and encouraged the department officials to submit DPRs on time to minimize the time gap between sanction and implementation of RIDF projects in the state.
The DGM, S S Vaseeharan, NABARD gave a detailed presentation on origin, genesis and operationalization of RIDF in the state as well as the country. The Deputy Chief Minister also distributed prizes to school students who won the prizes in essay writing competition on the theme of “Integrity – the way of life” organized by NABARD in connection with Vigilance Awareness Week. PRO