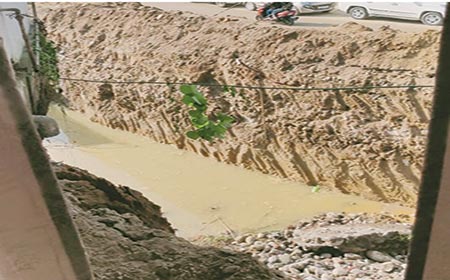 Staff Reporter
ITANAGAR, Dec 3: The protection wall and a portion of the office of the Arunachal Pradesh State Commission for Women (APSCW) have been damaged after the PWD highway division and TK Engineering bulldozed the area on Saturday to make way for highway in C sector, Itanagar.
The PWD highway division and TK Engineering or the district administration did not inform the Commission beforehand.
However, PWD authorities wrote a letter to the commission stating that
due to unexpected rain, a portion of the building and protection wall, and electric pole was damaged.
Even though the Highway authorities are blaming the rain for the inefficiency of the TK engineering, the department said that underpass wall will be constructed and that efforts are on war footing to save the building from further damage.
After the demolition, the department has expressed its concern and has said that it will pass on the message about the damages to the higher authorities.
Executive engineer, Naharlagun highway division has written to the TK Engineering with a direction not to go ahead with the “excavation” till the administration inspects the area.
The Itanagar district administration has been asked to organize a joint inspection to assess the hindrance likely to be encountered due to construction of the underpass.
Meanwhile, Arunachal Pradesh Women’s Welfare Society that inspected the office of the Women’s commission has expressed concern at the lack of safety.
APWWS has urged the construction company to immediately take steps to prevent further damages.
It also appealed to the State Govt. and District Administration to make alternate arrangements to shift the office to a safer location.