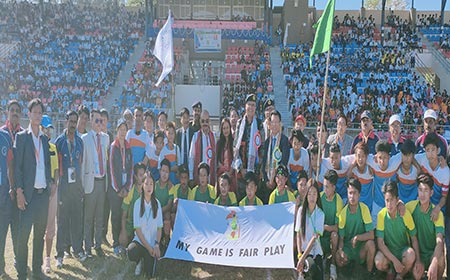 [ Karda Natam ]
PASIGHAT, Dec 4: The inaugural state level Kho-kho Championship, 2019 for boys and girls below 17 years began at outdoor stadium here in East Siang district on Wednesday.
Kurung Kumey defeated Tawang 25-14 in the championship opener.
Likabali based 56 Infantry Division GOC Maj General Ajai Verma, who declared the championship open, advised the players to play the sport in a friendly but competitive manner, maintaining the spirit of sportsmanship.
Verma said that traditional games and sports, including kho kho withstood the test of time and are even relevant today. He expressed the hope the championship would go a long way in developing team spirit and leadership quality among the players and also help them stay physically fit and healthy.
Attending the opening ceremony, Education Minister Taba Tedir said that the ministry of youth affairs and sports has given impetus to revive and promote traditional games and sports, including kho kho.
“It is heartening to see the growing popularity of kho kho among the young generation,” Tedir, who is also the president of Kho Kho Association of Arunachal Pradesh, said.
Encouraging the youths to make career out of sports, he said that meritorious kho kho players would also be extended all facilities, like incentives, scholarship and job quota by the government as given to sportspersons from other disciplines.
Local MLA Kaling Moyong urged the people, especially the youth to play sports and it an important and essential part of their lives to stay physically fit and healthy. He urged the ‘sports loving’ public of Pasighat to extend their support and cooperation to the organizer of the event to make it a grand success.
Arunachal Kho Kho Association general secretary Puto Bui spoke about the importance of games and sports.
Secondary Education Director Gania Leij also spoke.
As many as 29 teams from 20 districts are participating in the 10day event. The final will be played on 10 December.
East Siang Deputy Commissioner Dr Kinny Singh and SP Rajiv Ranjan Singh were present during the opening ceremony. (With inputs from DIPRO)