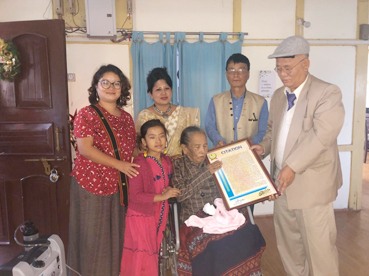 ITANAGAR, Dec 6: The Arunachal Pradesh Literary Society (APLS) has felicitated Minoti Riba for her “outstanding and tireless contributions in the fields of art, culture, literature and social service over the last five decades.”
APLS executive members led by its president YD Thongchi felicitated Riba at her Naharlagun residence on the occasion of the 14th foundation day of the APLS. Riba is ailing for some time now.
The citation reads that Riba “is a bridge between Assam and Arunachal Pradesh for which she was awarded with Sammanoy Setu Bota.
“She rendered a very meritorious service for the cooperative movement in Arunachal Pradesh, which was a lifeline for the people of the state when no essential commodities were available and market economy was in its infant stage for which act of her, she was conferred with the Best Cooperator of Arunachal Pradesh award in 2007,” it said.
The citation reads that the APLS felicitated her “for her multifarious role as a person of national integrity and lifelong contribution for literary upliftment in the state of Arunachal Pradesh.”
Meanwhile, the APLS’ foundation day was celebrated at the JN State Museum here. The day was also celebrated in Ziro (Lower Subansiri) and Pasighat (East Siang).
Chairperson of the Arunachal Pradesh Women’s Welfare Society, Gumri Ringu, who attended the event here, lauded the service of the APLS in flourishing of the literary atmosphere in the state.
“The APLS, under the leadership of writer YD Thongchi, an icon, has provided a platform to budding writers and literary aspirants. The mission should be continued,” she said.
Thongchi in his presidential address presented a brief on the yearlong activities of the APLS. He announced that the APLS will constitute a literary award, named ‘Arun Literary Award’, for creative writing, besides the Luminous Lummer Dai Award.
The other highlight of the day was the awarding of a citation to Nabam Tata for his contributions in drama writing and literary and cultural activities over the years.