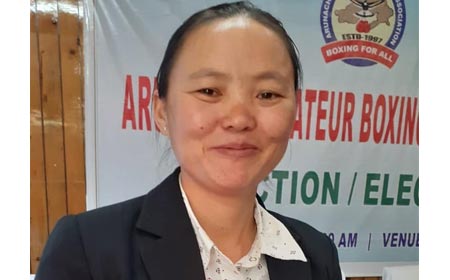 ‘Future of boxing in Arunachal bright’

Staff Reporter
ITANAGAR, Dec 8: The future of boxing in Arunachal is bright, said newly appointed Arunachal Amateur Boxing Association (AABA) president Tadang Minu.
“Though Arunachal has made tremendous progress in boxing in the last 10 years, there are still miles to go,” Minu, who succeeded DK Dinglow as the AABA president, said here on Sunday.
“We have seen a good number of boxers from Arunachal in the Indian camp only because of the dedicated effort by the AABA officials headed by Dinglow sir,” she said, acknowledging the contribution of the former AABA president in promoting the sport in Arunachal.
Minu, who is an assistant professor in the physical education department of Rajiv Gandhi University, said: “Being the president of AABA, my priority would be promotion and development of the sport at the grassroots level.”
“I feel very privileged to have the opportunity to work for the development of boxing in the state and lead the boxing community. It (the post) gives me more responsibility towards promotion and development of the sport in Arunachal,” she said.
“It is a step forward towards woman empowerment in a state like Arunachal – where the high posts are generally held by men – as well as recognition of my expertise in boxing and contribution to the state in this field,” Minu, who is also the Boxing Federation of India (BFI)’s women commission chairperson, said.
The AABA’s unanimous decision to select her as its new president was also hailed by the BFI.
“She is a very energetic and capable administrator and boxing coach,” said BFI treasurer Hemanta Kumar Kalita from Assam.
Minu earned her diploma in coaching from the National Institute of Sports’ Netaji Subhash Eastern Centre, Kolkata (WB) in 2007, and completed her graduation and post-graduation courses in physical education from Guru Nanak Dev University of Amritsar, Punjab.
She had represented the country in the 59th International Session for Young Participants (ISYP) held in Ancient Olympia, Greece, in June this year.
The ISYP is run by the International Olympic Association (IOA) and is designed as an introduction to Olympism and the Olympic movement. The session brings together a large international group of young people, Olympians and people active in sports.
The aim of the IOA is to educate and motivate young people to use their experiences and knowledge gained from the session to proactively promote the Olympic ideals and educate others in their countries.
Earlier, outgoing AABA president Dinglow urged BFI representative Kalita to take up the issue of alleged nepotism in boxing against boxers from Arunachal a year or two ago. He also urged the BFI to help develop boxing at the grassroots level in the state.
Former Sports Authority of Arunachal chairman Bamang Tago said the AABA “is one among the nine performing sports bodies in the state,” and expressed hope that the performance of the boxers would improve further under Minu’s leadership.
Earlier, the executive body of the AABA was reconstituted.
Among others, Youth Affairs Joint Director Ramesh Linggi and Papum Pare DSO OB Meitei attended the meeting.