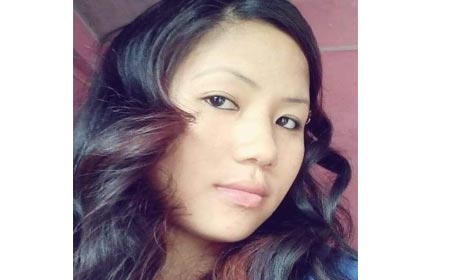 NAHARLAGUN, Dec 9: Renowned karateka and the first National Games medal winner from Arunachal, Debia Yakap, breathed her last in Lekhi village here on Monday afternoon after a prolonged illness.
She was serving as an assistant inspector in the tax, excise & narcotics department here.
Yakap had bagged a National Games medal in karate in the Games’ 33rd edition, held at Guwahati, Assam, in 2007. She had also won the gold in the cadet open category in the 19th AIKF Karate Championship held at Chennai in 2005, and the silver and the bronze medal in separate events in the 4th Asian Nihon Shotokan Karate-Do Championship held in Colombo, Sri Lanka, in 2011.
She had also participated in the 22nd Funakoshi Gichin World Karate Championship held in Sydney, Australia, in 2006.
Yakap was the flag bearer of the Arunachal contingent during the opening ceremony
of the 34th National Games held in Ranchi, Jharkhand, in 2014.
The sports family of Arunachal has deeply mourned Yakap’s demise.
Expressing profound grief over her untimely death, Karate Association of India (KAI) president Likha Tara described it as a great loss for karate in the state.
“We were fortunate to have a student like you. Though you left us for your heavenly abode, your memories will remain with us forever,” Tara, who is also the Arunachal Karate Do Association (AKA) president, said in a condolence message.
On behalf of the KAI and the AKA, Tara conveyed heartfelt condolences to the bereaved family, and prayed for eternal peace of the departed soul.
“She was a torchbearer for women sportspersons of Arunachal, and her achievements inspired many a young girl to play sports,” said Arunachal Olympic Association secretary-general Abraham K Techi.
On behalf of the entire sports family of the state, Techi conveyed sincere condolences to the bereaved family.
“May her soul rest in peace,” he prayed.