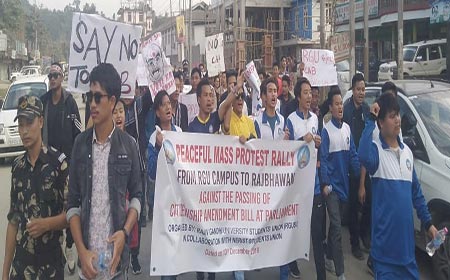 Staff Reporter
ITANAGAR, Dec 13: Joining Assam, Meghalaya and Tripura in the anti-Citizenship Act (CA) movement, thousands of students from Rajiv Gandhi University (RGU) and the North Eastern Regional Institute of Science & Technology (NERIST) took out a massive protest march from the RGU campus in Rono Hills to the Raj Bhavan here on Friday.
The protest march was jointly organised by the RGU Students’ Union and the Students’ Union of NERIST, in collaboration with the North East Students’ Organisation, the All Arunachal Pradesh Students’ Union (AAPSU), and the RGU Research Scholars’ Forum.
Chanting the demand for aazaadi (freedom) from the CA, the Rashtriya Swayamsevak Sangathan (RSS) and the BJP, the students took part in what was probably the longest protest march held in the state. 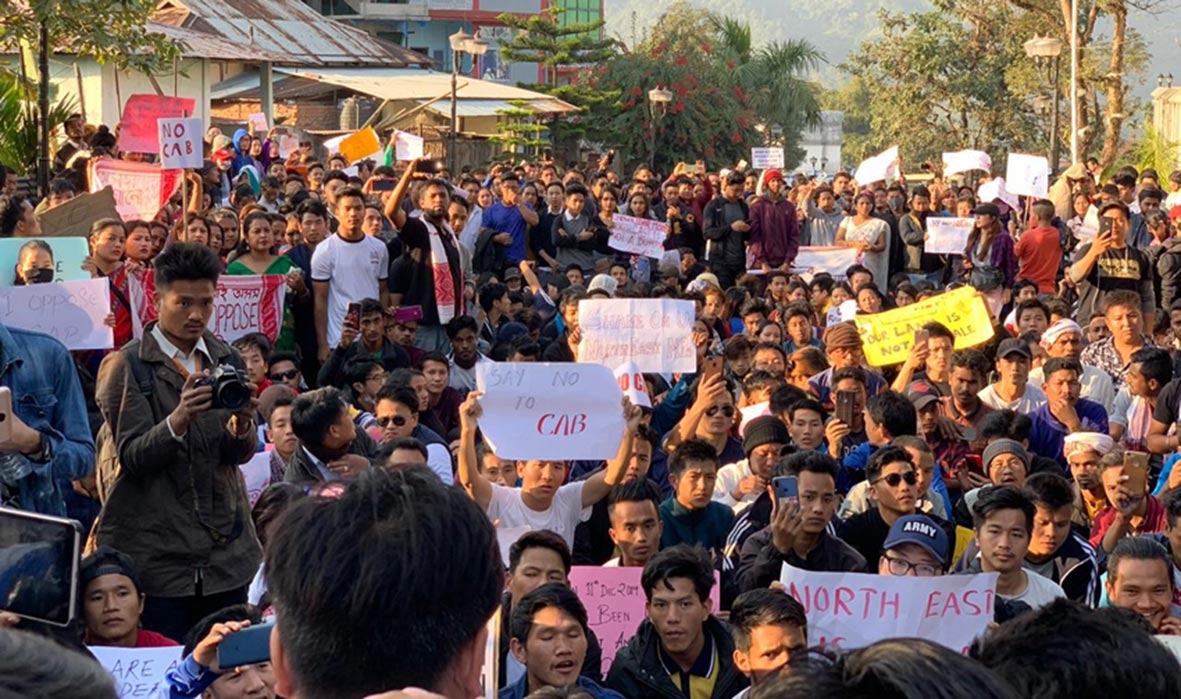 The organisations later submitted a representation to the governor, demanding that either the CA be scrapped immediately, or that the entire Northeast region be exempted from it. The protesters also demanded that the state government wake up from its slumber.
“How would exemption of Arunachal from the CA protect the state from illegal immigrants? How come the state government thinks that Arunachal would be safe when neighbouring Assam is in the midst of chaos?” said a protester.
“The government and our people are living under the illusion that exemption from the CA would keep Arunachal out of trouble. We have the longest porous boundary with Assam, and controlling (the entry of) illegal immigrants is humanly impossible if Assam is swamped with Bangladeshis, Pakistanis and Afghans,” he added.
The student organi-sations demanded an answer from
the state’s parliamentarians, Kiren Rijiju and Tapir Gao, for voting in favour of the CA. The organisations said their movement against the discriminatory CA, the BJP, and the influence of the RSS in Arunachal would continue unless the act is scrapped.
The Assam Students’ Association, the Assam Students’ Forum and the Assam Research Scholars’ Forum of RGU and the NERIST had also organised a protest march on Thursday in the university campus, demanding scrapping of the CA, which was recently passed by both the houses of Parliament.
Earlier, at the Arunachal Press Club, the AAPSU demanded that the state government clarify the status of the Chakma and Hajong refugees after the promulgation of the CA in the parliament.
Addressing press persons, AAPSU president Hawa Bagang said, “The government of India did not listen to the people of the Northeast despite the massive protests against the citizenship amendment bill (CAB). Though Arunachal Pradesh is exempted from the act, we are not happy.”
He said “the AAPSU’s stand is very clear. We want to know how the government of India and Arunachal will keep the Chakmas and the Hajongs after the promulgation of the act.”
He lamented that the elected representatives of the state and the Northeast, “who people had faith in,” voted in favour of the CAB.
“We appeal to the government of Arunachal to be vigilant at the check gates as there is the possibility of a rise in the influx of illegal immigrants in view of the protests in Assam,” Bagang said.
Demanding that the government clarify its stand on the Chakma-Hajong issue, AAPSU general secretary Tobom Dai said “the BJP government has sown the seed of discord in the Northeast. The BJP government wants to divide the Northeast states through the act as some of the states and their areas are exempted from the Citizenship Act.”
Dai also said several people of Arunachal are stranded in Assam and other parts of the Northeast because of the protests in Assam. He appealed to the protestors in Assam not to hurt the people of Arunachal who are stranded in that state.