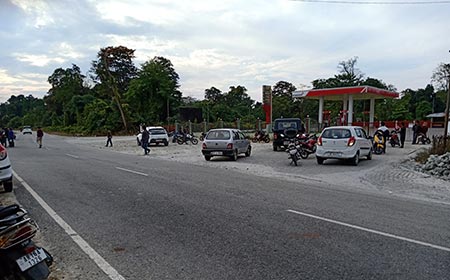 [ Karyir Riba ]
ROING, Dec 13: The ongoing protests in Assam against the promulgation of the amended Citizenship Act (CA) are taking a toll on Lower Dibang Valley (LDV) district.
Scarcity of fuel has affected even the basic day-to-day activities of the residents here. Out of the three fuel stations here, two have completely run out of both petrol and diesel since Thursday, while the third one has just a few litres of diesel left, which is being issued only on acquiring a permit from the deputy commissioner’s office, at the rate of 20 litres per permit.
Long queues of four- and two-wheelers could be seen outside the closed gates of these fuel stations, with the commuters requesting the management for just a few litres of fuel.
In another development pertaining to the protests, several people of the district travelling to Roing through/from Assam were stranded in Tinsukia. The Roing police carried out a rescue operation to bring the stranded people back home safely.
A team led by LDV SP Sanjay Kumar Sain and DSP Ringu Ngupok escorted the 26 stranded people and reached Roing at 5 am on Friday, with help from the Tinsukia and the Sadiya police. Out of the 26 persons rescued, four are from Namsai and the rest are from Roing.
“If the protests continue, we will face more difficulties in the form of basic amenities, trade, and medical emergencies,” said a concerned resident.
DIPROs add: Meanwhile, the East Siang district administration has directed all fuel depots in the district to submit daily reports on the stock of fuel available with them.
While rationing of fuel per vehicle has been put in place, DC Kinny has also prohibited sale of fuel in barrels and galloons. Black marketing and hoarding have also been prohibited.

The East Siang administration has also set up a 24×7 helpline for the people of the district who are stranded in Assam.
Stranded commuters may contact East Siang SP Rajiv Ranjan Singh at 9436043100, ADC (HQ) Taddo Borang at 94362-53603, the EAC (judicial) at 9436249735, the CO (TPT) at 7628059313, the Ruksin SDPO at 9436653803, and the Pasighat PS OC at 9436259610 and 7005212248.
The fuel depots in Tirap, Longding and Namsai districts have also run out of petrol and diesel due to disruption in regular supplies.
The Tirap administration has locked down the lone fuel depot in Khonsa for security reason after it ran out of stock.
A report from Longding said petrol is being sold for Rs 350 per litre in the black market in the district headquarters.